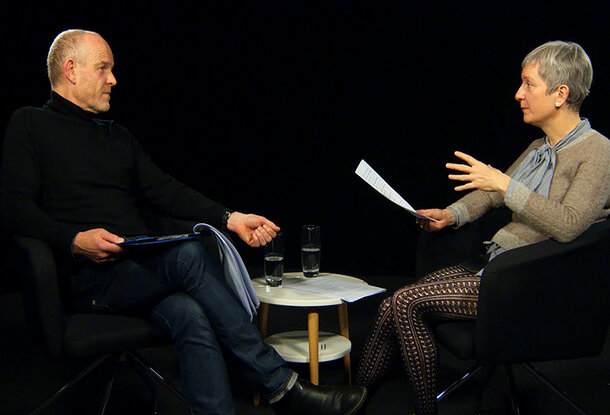 Andrew Simms and Sarah Woods reflect on the accidental relevance of their performance-lecture Neoliberalism: The Break-Up Tour for the launch of Digital Theatre+‘s new filmed discussion.

“A pandemic spreads” are the first three words of our participatory show Neoliberalism: The Break-Up Tour. Part lecture demonstration, part games show, it charts the rise and crisis of an economic ideology. It was commissioned by Artsadmin to open its 2°C Degrees Festival in 2017, long before we could imagine the extraordinary upheaval that the coronavirus pandemic has caused. A discussion based on the performance and filmed by Digital Theatre+ has just been launched. Now, rather than eclipsing concerns about how economics shapes the world, the virus has lifted a sticky scab to reveal the issues we explore in the piece in the raw.

The ‘invisible hand’ of the market failed very visibly

The show’s first three words come from The Wall Street Journal Guide to Investing in the Apocalypse, published in 2011 – which has been getting some good online reviews over the last nine months. At the time we first performed our piece, we had the luxury of treating it like a joke – a bad one admittedly, but something we could laugh at all the same. Now there is a plethora of similar online wisdom, to be acted on immediately, like the piece Forbes published in August. Written by a ‘Chief Wealth Architect’ (how can such a thing exist outside satirical comedy?), it gives clear advice as to how to prepare for “the greatest wealth transfer in history”, including tips such as the importance of “having cash on hand to capitalize on opportunities” and the “substantial opportunity to save on tax”.

It was easy to think, at the beginning of the pandemic, that there was at least a certain equality to it – that the virus was indiscriminate in its devastation of livelihoods and lives, but of course its trajectory follows the same pattern branded into every aspect of our society and its effects are deeply unequal. Opportunity, as any Chief Wealth Architect will tell you, is key. If every neoliberal crisis is a coin – with opportunity on one side and danger on the other – the pandemic has shown us that which side of the coin you flip has nothing to do with chance. We have seen how the virus exposed the many fault lines in the economy and society that have grown under neoliberalism.

Citizens stepped in, like the network of 700 people aged 6 to 91 in Somerset who stitched protective equipment to help health and care workers

It exposed at once both the critical value of key workers from health, to transport, shops and care, and how much these people who provide society’s foundations are undervalued. At first the movement to ‘clap for carers’ was an overdue and welcome recognition of their contributions. Then, in the UK at least, as future government spending priorities were made clear, the story changed in terms of meaningful recognition through pay to one instead of ‘cap for carers.’ Pushed by the pandemic, there were divides opening up everywhere. Impacts were highly unevenly spread with non-white communities much worse hit.

Gaps were revealed between the health system and the more abandoned care homes, between waged workers and  freelancers, manual and white collar workers, big businesses better able to play available offers of official support and small business, between help offered to homeowners compared to those in rented accommodation. Even where support was theoretically available with public backing, the decline of local retail banking, replaced under neoliberalism with more dominant speculative finance, meant that small business were left with the bleak prospect of taking out risky loans and only then if they met the banks’ restrictive criteria (banks who themselves were covered with government guarantees).

And while some have been making money hand over fist, like the big supermarkets, the many hands of community and neighbourhood have reached out to make up for these failings.

Echoing moments of disaster when communities organise self-help in vacuums of official help, like wildflowers in a Spring meadow mutual aid groups sprang-up in towns and cities. The government failed to prepare for a pandemic, in spite of a 2016 report on Operation Cygnus, an exercise that revealed serious holes in planning. But countless citizens stepped in, like the network of 700 people aged 6 to 91 in Somerset who stitched protective equipment to help health and care workers.

By extreme contrast and at the very same time, the habits and assumptions of neoliberal economics were directly undermining efforts to control the pandemic. With experienced local public health professionals sidelined, an ‘outsourced’ approach to test-and-trace, which trusted to the supposedly efficient market place staggered from crisis to crisis and, around a year since the virus emerged, still isn’t working. The ‘invisible hand’ of the market failed very visibly.

The show ends with a speech about hands through time – the hands of potters, bakers, textile workers, i-phone assemblers, food bank visitors, makers, refugees, supporters and carers. About what is passed on. What is offered. What is given. It has been hard, as the year has darkened, to hold onto much hope in the face of such gut-wrenching uncertainty and loss. With the year, our sense of community has waned and, like the foxes still hunted by those who know they’re unlikely to be convicted, we’ve gone to earth. What sort of world we emerge into in the New Year depends on a number of things, many of which we don’t have the opportunity to affect. But how we use our heavily sanitised hands is up to us.