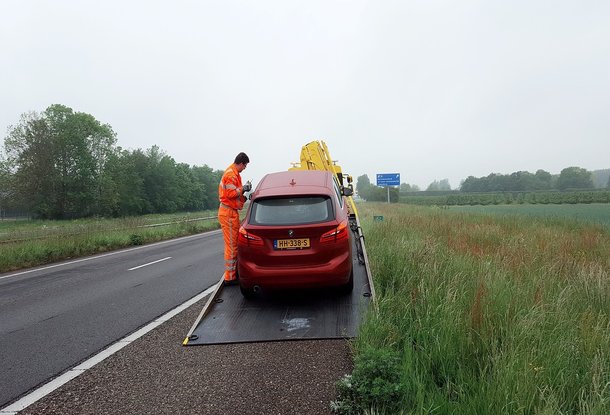 The world of staycation is bound to lead to those sad scenes by motorways and country roads of the broken down, burst tire, overheating vehicle. Time to call the AA (Automobile Association) or the RAC – splendid British institutions, supposed to be there to assist.

Now, by and large, the AA leaves me cold. It is almost always the voice of the motorist-imagined, and never the voice of the person on pavement breathing vehicle fumes or the pedestrian or cycling hurt by drivers, though it did campaign for unleaded petrol. I’m a member and have no complaints apart from the amount of contracting-out of roadside services it seems to do, rather than sending those sunny yellow vans along. But it all seems to work okay-ish.

A useful service in other words, though a stodgy one, with few apparent innovations. It was founded in 1905 and had as one of its first aims, the protection of motorists against speeding restrictions (that’s what the famous AA salute actually was- it warned motorists of hovering speed police, a surreptitious  undermining of the law), and rather than the protection of people against speeding vehicles .

One day the tyres on this model of corporate capitalism, the Anglo American model, are all going to blow

It motored along fairly effectively, helping motorists and bigging-up roads and road building, for over 80 years until 1999 when it de-mutualised. It was part of the great sell-off frenzy. Members got a rather measly ‘windfall’ of £240 each and the route was set for an entirely different future. The AA was bought by Centrica for £1.1 bn, having had virtually no debt at all. That was all about to change.

The AA, in 21 years, has accumulated debts of £2.6 billion. Members – like me- have seen their subscriptions shoot up from around £43 a year to around £186 a year, which may be reasonable but comes with ever more imprecations to buy products, and no noticeable improvements in basic services. It has changed hands several times and went public in 2014, signalling the arrival of even more debt. In effect the AA, a British institution with a useful function, trained staff and the capacity to be a powerful part of the body politic, has become a debt mule for every greedy hedge fund and private equity company nosing around for a profit.

The money goes off in dividends – somewhat diminished last year – instead of to the actual humble work for which it was originally intended. It certainly doesn’t go the staff of the AA – who were described cryptically in the flowery annual report in 2020 as having reported that they wanted to be listened to more, have their skills developed more, and be made to feel more valued in the company. It doesn’t go on building up the number of patrols, which in the past few years may have been cut from 3,600 to 2,900.

The AA is now looking for another buyer. That buyer will take on the huge debt incurred by its predecessors, will add to it bits of the purchase price; the company will be unable to innovate in the way an experienced motoring organisation should be able to do – think what it could do in terms of environmental awareness, bringing motorists round to other ways of transporting themselves, influencing the type of vehicles being built, helping develop fossil fuel free methods of transport, weighing in on behalf of the planet. Instead we have fatuous slogans in the annual report like ‘Innovate to Grow Roadside’ – and the like.

So what we have now is pure presentation pure. It’s a mule for sale , with rich pickings for some – not excluding the last CEO who enjoyed  a salary of £1.4m, before he went and messed up by swinging a punch at a colleague. What we do not have is a healthy British institution capable of change and response to public needs.

So that notional stranded summer motorist is – like millions of British customers, clients, patients, and staff – bearing a load of corporate debt designed to enrich a few investors and financial companies. One day the tyres on this model of corporate capitalism, the Anglo American model, are all going to blow – and then we’ll be well and truly stranded.