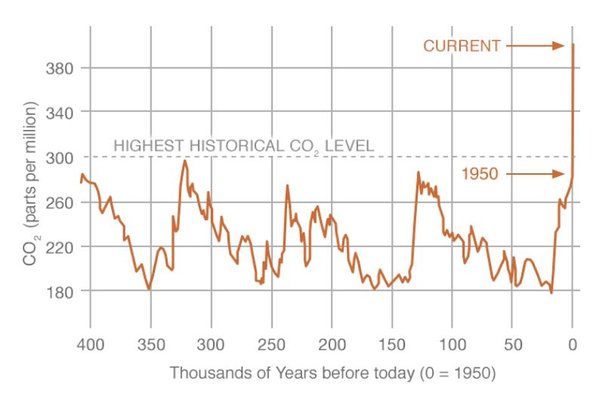 While the UK and much of Europe was in the grip of the beast from the east, the high Arctic basked in unprecedented above-freezing temperatures. Yet another example of the remorseless march of climate change or just a blip, the fact that – in late February – London was colder than the North Pole has to be a concern. Whatever the cause, the freezing conditions are a reminder – as I’ve previously addressed – that cold weather doesn’t mean climate change isn’t happening and may actually be an unlooked for consequence. The recent bitter weather, for example, may be a signal that an evening-out of temperatures between the tropics and the polar region, as the planet warms, may be causing the Polar Vortex to break down. If this girdle of powerful winds, which keeps the cold Arctic air in, and warmer air masses out, is collapsing, then we can expect further freezing blasts of escaping Siberian air. At the same time, warm air will be able to make increasingly frequent winter forays into the High Arctic; accelerating ice melting and playing havoc with the lives of Polar Bears and other wildlife.

But the latest climate news is not all bad. One new piece of research – on the face of it at least – actually seems to be bringing some good news. One of the key unknowns influencing how fast and how much the Earth is going to warm is what’s known as Climate Sensitivity, which is a measure of the average temperature increase arising from a doubling of atmospheric carbon dioxide levels compared to pre-industrial times. Prior to the industrial revolution, the concentration of carbon dioxide in the atmosphere was around 280ppm (parts per million), so climate sensitivity is the temperature that corresponds to 560ppm. For comparison, in January 2018, the atmospheric concentration of carbon dioxide was a little over 408ppm, and is rising – on average – by a couple of ppm year-on-year, although this has recently increased and last year by a record amount.

The IPCC (Intergovernmental Panel on Climate Change) is still running with something between 1.5° – 4.5°C for its climate sensitivity estimate. In other words somewhere between serious and cataclysmic in terms of impact. This huge range has been narrowed down in a new study, published in Nature, by the University of Exeter’s Peter Cox and others, who propose a rise of somewhere between 2.2° – 3.4°C, with a best estimate of 2.8°C. While the work has been trumpeted in the media as ruling out the most devastating scenarios, little has been said about the fact that it excludes the most optimistic pictures too. A bottom-end 2.2°C global average temperature rise would be all-pervasive, while the realisation of the best estimate 2.8°C would see society struggling to adapt and survive. So, some good news, but also some not so good news. Furthermore, the figures are far from being set in stone.

The numbers arrived at by Cox and his colleagues were based upon examining year-on-year changes in global temperatures in response to short-term variations in the climate system, but studies using different methodologies have come up with other figures. Most notably, another recent paper, also published in Nature, flags up the fact that the best climate models – those that best fit observations to date – also predict the highest temperature rises; the bottom line being that global average temperatures (compared to pre-industrial) could be as much as 4.8°C by the century’s end.

Whatever the various models predict, there is a real worry amongst many in the climate change field that temperatures will climb more rapidly than expected, especially when tipping points and feedback loops, which remain only poorly understood, are taken into account. This means that any given temperature estimate may just be a step on a longer-term warming trend. In a shocking statement a few weeks back, the UK Met Office, suggested that a combination of natural variability and anthropogenic greenhouse gas emissions could take the global average temperature hike above the 1.5°C mark within just five years. Bearing in mind that a key goal of the 2015 Paris Climate Accord was to pursue efforts to limit the global average temperature rise to just this level, this demonstrates how big is the gap between expectation (or is that wishful thinking?) and reality.