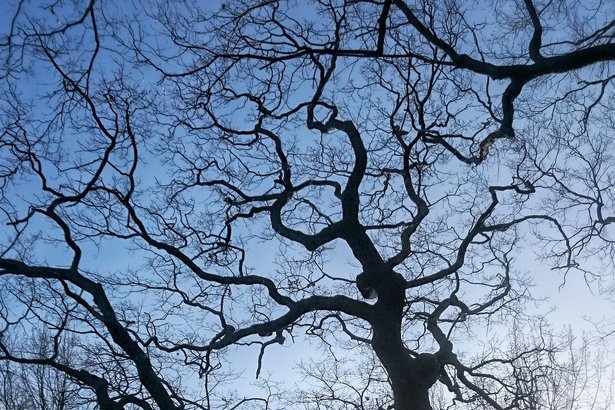 Folk tales often grow from periods of great hardship. The tale of Hansel and Gretel, though first written down much later, is thought to stem from the onset of the medieval cold period, known as the Little Ice Age and the Great Famine in Europe of the early 14th century. Horst and Gertrude by Hamish Fyfe, Professor of the Arts and Society, is a retelling of that story that renders its Gothic horror in very human terms, and the awful choices that face families alive today, living in shattered countries where help is nowhere immediately at hand. His story continues a new monthly feature from our project on modern folk tales for troubling times

It appeared first in our inaugural collection of tales ‘There was a knock at the door…’ is available from the Real Press and elsewhere.

Horst and Gertrude, by Hamish Fyfe

During a dark and freezing night, when the windows howled and the doors squeaked, a young mother was woken from her sleep by the crying of her children.

She knew the cry of her own children and could tell it from those of the windows and doors and from the cries of Hansel and Gretel, whose father, a good man, she had married recently. Moving quickly through the little, dark and noisy house, she found Horst and Gertrude and comforted them as best she could. The children’s eyes looked wide and blue and questioningly right into their mother’s soul.

“Momma we are hungry,” cried little Horst as Gertrude snuggled up against her mother for warmth. So thin, so ill, thought her mother: what will become of us all?

Gently, she sang to the two little ones who lay painfully in her lap:

Which, translated into English, means:

A little man by the window stood,

Saw a rabbit hopping by

Knocking at his door.

When the morning came, the mother, who was stepmother to Hansel and Gretel, made a terrible decision, one she had been dreading but knew she had to make soon. Stirring the thin porridge she so lovingly restricted in quantity, so that everyone in the house could eat, she could see that before long there would be no food and she would be able to feed no one. That terrible thought simmered in her mind as the last of the porridge simmered on the wood stove.

Seeking to speak to her husband where the children could not overhear them, she took him outside in the early dawn to a small grove of trees beside the house.

“Last night, the children cried and I could not help them. Husband, I cannot bear to see them like this and fear that all our children will die if the famine continues to mock our efforts to stay alive. Horst and Gertrude are the younger and the weaker ones, whilst Hansel and Gretel have wit and courage beyond their years. My poor dear husband, it is time for Hansel and Gretel to take their chances in the world beyond our care, unfairly plucked from childhood as they might be. Year after year, the crop has failed, the land is parched and the weather is cruelly changed. If they stay we will all surely die.”

“Wife,” said Hansel and Gretel’s father. “When I married you, I wanted to take care of you and your children as I did for my own. I love you all and would not see harm come to any of you.”

The man and his wife fell as silent as the windy sky and then the man wept. His wife walked slowly back to the house and her husband stood there for a long time before moving, as the last shadows of the night slowly retreated around him. When he finally stirred, the sun was flashing through the treetops in the wood so soft and beautiful that, had he not been so fearful, he would have been filled with happiness.

Returning to the house, the father looked at Hansel and Gretel, smiled, and said: “My two little ones, a great adventure awaits you in which you can show how brave and clever you are. Our mother has prepared a package for each of you to take with you on your journey.” Then, with a heavy heart, he led the children out into the wood.

The rest you know…

Hamish Fyfe is Professor of the Arts and Society at the University of South Wales. He is Director of the George Ewart Evans Centre for Storytelling which is the only research European research centre with storytelling as its focus. He is an Associate Editor of the Journal of Arts and Communities. He has stories in both of the ‘Knock’ collections.

‘There was a knock at the door…’ is available from the Real Press and elsewhere.