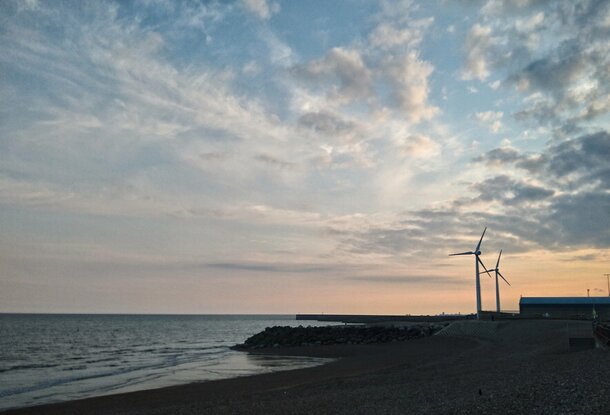 With bad news from the global heating front arriving in lorry loads, it is becoming ever more difficult to stay positive about our chances of successfully tackling the climate emergency. The astonishing temperatures across the western United States and Pacific provinces of Canada demonstrate beyond any doubt that climate breakdown is here, now, today. But where is the international outcry; the demands to ramp up the fight on emissions? Where is the call to arms to stop global heating in its tracks? Sad to say, beyond more dire warnings from those who know the truth, lip service remains the order of the day, both here in the UK and across the planet.

As hundreds, if not thousands, roasted to death beneath the ‘heat dome’ that enveloped a significant chunk of two of the world’s most developed nations, government after government continued to propose insipid, pale-green, policies that simply don’t meet the scale or speed of the threat. As things stand, you can forget the comfy idea that we can keep the global average temperature rise (since pre-industrial times) below 1.5ºC. On our current trajectory, there is not a melting snowball in hell’s chance of dodging this. In fact, according to the UK Met Office, there is a 10 percent chance that the mean annual global temperature will hit this mark in just the next five years.

Even worse, new research suggests that we have now crossed a tipping point, such that whatever action we take, the global average temperature rise is now certain to breach the 2ºC guardrail, beyond which catastrophic climate breakdown becomes all-pervasive. The only question remaining, is just how long it will take us to get there. On the basis of prevailing inaction, probably little more than decades.

In the UK, Boris continues to talk up his government’s ‘world class’ promise to achieve net zero emissions in 2050, while putting in place next to none of the measures needed to accomplish it. When it comes to the climate emergency, talk, without action, just adds hot air to the heat dome. And that is what the UK government is doing. The only thing it is succeeding at, is somehow managing to avoid most of their own obligations. Only last week, its advisors – the UK Climate Change Committee – hauled it over the coals for delivering just one fifth of its pledges to tackle global heating and climate breakdown. In a year when the UK hosts the COP 26 climate conference, at which climate finance will be key, the government has just voted for massive cuts to UK aid spending, money which could have gone to help the most vulnerable countries facing climate breakdown. The UK, historically, and still in comparison with those countries is, of course, vastly more responsible for creating the problem

In the unlikely event that this government pulls its finger out, puts its money where its mouth is, and begins to take the actions that the science, and its advisors, demand, its plan to reach net zero UK emissions in a little under 30 years is still contingent on huge quantities of carbon being removed and stored where it can’t do any harm. New forests would play a part, but so-called Carbon Capture and Storage – or CCS – is slated to bear the brunt. This technology, designed to liquefy carbon dioxide emissions from industrial installations, and store it underground, has been developed from fossil fuel companies’ method for squeezing out the last drops of oil from senescent reservoirs, It has, however, only been tried at small scale. Rolling it out at the national level would be massively costly, hugely energy intensive and almost certainly environmentally damaging.

As well as the UK, governments around the world appear to be coalescing around 2050, or thereabouts, as the target date for net zero emissions, but plans to reduce emissions at the rate required – a 45 percent cut by 2030 – are in tatters. The corollary of this is that CCS would need to be adopted on a colossal scale to ferret away much of the excess. And even this would likely not be enough. Support is growing by the day for large-scale ‘geoengineering’ schemes that either directly remove carbon from the atmosphere or that load the atmosphere with chemicals to reduce incoming solar radiation, thereby cooling the surface. Embraced by tech billionaires and – like CCS – by the fossil fuel sector, such technologies are not only massively risky and expensive, but are lauded by the libertarian right as having the best chance of knocking the inconvenience of global heating on the head while keeping unfettered capitalism in the fast lane.

We are at a very dangerous point in the climate emergency, where the road to the future of our planet splits in two. One branch leads to a world embracing green technologies and reforestation on a truly massive scale, while at the same time seeing a rapid transition in the way we live our lives, in favour of reduced flying, less meat and a national focus on well-being rather than increasing GDP. Following this path could slow down the rate of rising global temperatures significantly, so that we don’t breach the 2ºC guardrail for many decades, perhaps even centuries, providing plenty of time to adapt.

The other sees business as usual, with a little pale green and ineffective tinkering around the edges, the outcome of which is the continued rapid rise in emissions and the shattering, within decades of both the 1.5ºC and 2ºC guardrails. Eventually – but too late – the scale of the emergency finally hits home, leading to chaotic, last-ditch, attempts to deploy geoengineering technologies, even as the full force of climate breakdown begins to tear society apart at its seams.

So we have a straightforward choice, but which path will we end up following? I would like to think the first but, in the build-up to the COP26 climate conference – probably the most critical gathering in the history of humankind – it is difficult to be optimistic. The failure to build back greener after the pandemic is enormously depressing and it is hard to see what will make world leaders finally wake up to the desperate urgency of our predicament.

Perhaps the hothouse conditions prevailing across much of North America – with another heat wave simmering in and record temperatures in the all-too symbolic Death Valley – may yet prove to be the catalyst that drives deep emissions cuts in line with what the science demands. In the last week, the British Columbian village of Lytton recorded three days running of temperatures just a whisker below 50ºC. The fact that the village has since been obliterated by wildfires says everything about the truly unprecedented nature of this weather emergency, and sends out a Mayday that we surely can’t ignore.

Bill McGuire is Professor Emeritus of Geophysical & Climate Hazards at UCL, and was a contributor to the 2012 IPCC SREX report on climate change and extreme events. His novel, SKYSEED – an eco-thriller about geoengineering gone wrong – is published by The Book Guild.

One thought on “Death in the valley – is this finally the alarm that can’t be ignored?”