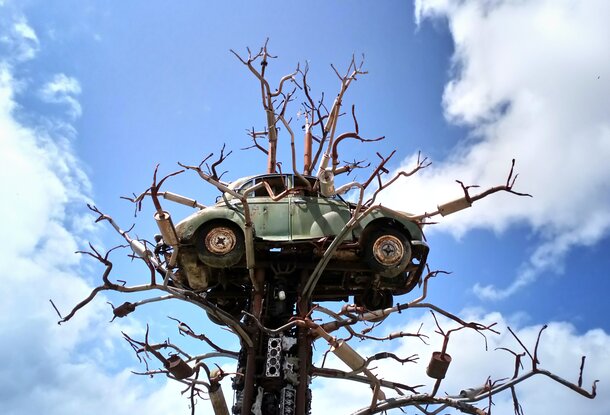 Great cities set the tone for modern living and a new campaign for Car Free Megacities is aiming to improve the music of our urban streets as well as clear their air.

The campaign is writing to the mayors of Paris, New York and London to ask if they will work together to accelerate the process of change.

This is a moment of great possibility to build back better from the COVID-19 pandemic in a way that rapidly and significantly reduces private car.

There is a widespread hope that it will be possible to learn lessons from the pandemic about the possibility of rapid improvements to make city life better for people, for nature, and for the climate.

But there also are signs that a drop in air pollution from burning fossil fuels at the height of the pandemic is already bouncing back, with car traffic returning noise, pollution and danger to roads.

We know that there are huge human health and wellbeing gains still to be won.

The most recent research points to 8.7 million deaths around the world being due to air pollution from burning fossil fuels.

That’s nearly one in five of all premature deaths globally, with transport being a major source especially in cities where people and cars are forced to mix in close proximity.

Add to that the annual toll of death and injury from traffic crashes – around 1.35 million people killed, and anything between 20 million to 50 million more being injured, and many left with permanent disabilities.

Some things have been pushing us in the wrong direction, such as the promotion by car makers of larger, more polluting SUVs which are also more dangerous for other road users and people on pavements.

Drivers rush down roads not designed for cars just to shave minutes of journeys, regardless of the noise and air pollution and physical dangers they present, especially to the children living there.

Nor are London’s parks and playgrounds safe – more than one quarter break international safety limits for air quality.

But things are also very different between major cities, and the new campaign seeks to learn from that, and to encourage the cities to learn from each other and also from the unique experiences of change during the coronavirus pandemic.

Where there have been positive innovations to reduce traffic and pollution, and improve the quality of city life, how can temporary improvements be made permanent and enduring?

City streets notoriously full of polluting traffic were eerily empty – there were no cars, there was no congestion, there was no commotion. People saw glimpses of how different cities could be.

Quieter roads also meant that cycling flourished. Tasting what our streets could be like – a place where pedestrians and cyclists take priority over cars – has accelerated public appetite for cleaner, greener cities.

With broadly similar populations ranging from seven to nine million, large numbers of inner city dwellers already live car free – even if the streets are congested with traffic.

A total of 60 percent live car free in London, 66 percent in Paris and 78 percent in New York. But the streets of New York are notably more dangerous for other users with 229 killed by traffic in a year, compared with 110 in Paris and 121 in London.

Average air pollution is the worst in Paris, as measured by nitrogen dioxide and small particles, with London and New York similar. Drivers in Paris also lose most time in traffic, with London second and New York third.

Many more trips, however, are made by foot in Paris – 50 percent compared to London’s 25 percent and New York’s 31 percent.

Cars take up a huge amount of space in all three cities, around 30km2 or more, or about the size of 4,200 football fields.

London, New York and Paris have another thing in common: all three cities have examples, even from before the pandemic, of traffic reduction measures that provoked enormous criticism before they were introduced, only to prove successful and popular once they became a reality.

This goes for schemes ranging from London’s congestion charging to the pedestrian plazas in New York’s Times Square and to the Paris Respire zones.

This has been a common pattern with traffic reduction measures internationally for decades – of complaint and resistance followed by acceptance and appreciation.

A ‘car free city’ is not a city with no cars at all. There are people, including some with disabilities, who cannot get around without a car, and reducing the number of cars in megacities will make their lives easier too.

The scope for improving the roads for essential users and services by reducing non-essential private cars is huge. At the moment in the UK, even for short trips of between just one and two miles, six out of ten people still drive.

The good news to emerge from the traumatic experience of the Covid-19 pandemic, is that we have seen how quickly a city like London, and several of its boroughs can change.

Innovative measures to stop rat-run type through traffic, such as low traffic neighbourhoods, have shown the way ahead to improve air quality, make streets safer for walking, cycling and for children playing, and to reduce traffic where people live.

At the height of the first lockdown, air pollution in some UK cities dropped by as much as 60 percent.

Lessons too have been learned about how best to introduce schemes. Some have protested loudly at being required to change habits for the wider public benefit, and some protests seem to have been the result of political opportunism.

But there is finally a sense of a turning tide in attitudes towards urban transport, and a growing reluctance to accept the human and environmental costs of excessive car dependence.

Nearly 30 percent of European households have no access to a private car anyway. An Amsterdam City Councillor recently won a campaign to remove 10,000 car parking spaces.

In Copenhagen city centre, 80 percent of all journeys are made on foot, and 14 percent by bicycle. Oslo city centre is going fully private car free.

In some of the latest and most exciting developments, cities are beginning to shift their cultural environments to break car-habits too.

Going beyond the mere removal of car parking spaces, Amsterdam has removed adverts for ‘high carbon living’, including for petrol powered cars, from its subway network.

With fewer cars on their streets, more clean air and space for people and nature, cities like Paris, New York and London would truly earn the tag of ‘mega.’

This article was first published in the Ecologist.