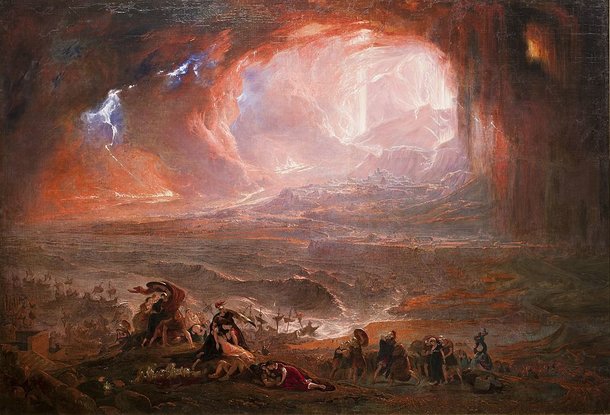 It’s not what most people want to hear at the moment, but the impact of Covid19 on society and economy is a gentle breeze compared to the hurricane that global heating and ensuing climate breakdown will ultimately bring.

Some problems, when examined closely, simply fade away or – at the very least – don’t appear quite as serious as they did initially. But this is not the case with anthropogenic global heating. The more we study it, the bigger the problem becomes, and the more terrifying the consequences.

Over the course of recent months, the pandemic obviously gripped everyone’s attention. News outlets followed suit, and you would be forgiven for thinking that almost nothing else, barring the Black Lives Matter protests, was happening. But you would be wrong.

Some good news made a brief appearance: that greenhouse gas emissions are likely to be down by between six and eight percent this year. However, the fact that we need this scale of of cut every year, if not more, for at least the next decade, passed by most news outlets and the public. The last month or so also has seen the release of climate research and observational data that make for very disturbing reading. And, this has come at a time when temperatures within the Arctic Circle reached a staggering, all-time record of 38°C.

The daisy chain of depressing news began at the end of May, when the Met Office Hadley Research Centre published a new supercomputer analysis of the consequences1, so far, of climate breakdown, and new projections for the future. The results revealed that our planet’s climate is now completely different to 30 years ago, and that the human fingerprint is everywhere.

Since the 1990s, the global average temperature has climbed 0.5°C, sea levels have risen 10cm and the concentration of CO2 in the atmosphere has shot up by 17 percent. Projections showed that even in the most optimistic emissions scenario, summer Arctic sea ice seems doomed in a hotter world. If there is a nugget of less bad news, it is that the worst case scenario might be avoided due to slower growth in coal use. Even so, the planet could easily be 2°C hotter by mid-century.

If the Hadley Centre study wasn’t worrying enough, hard on its heels came some truly terrifying news. There is an almost magical number in climate change science, which is the value of so-called climate sensitivity. This, in simple terms, is the amount the planet will eventually heat up if the concentration of atmospheric carbon dioxide is doubled from pre-industrial times, when it was around 280 parts per million (ppm). In other words, to 560ppm.

New modelling being undertaken for the Intergovernmental Panel on Climate Change’s (IPCC) Sixth Assesment (to be published in 2021) suggests that the worst-case figure for climate sensitivity could be 5°C – or even more – rather than 3°C as previously thought2. This is a shocking finding. At the time of writing, atmospheric carbon dioxide levels sit at 416 ppm. Before the pandemic shut down much of the global economy, they had been climbing at an annual rate of around 2.4 ppm.

It is critical that we make the most of the hiatus to reboot society and the economy to make slashing emissions, not promoting unsustainable growth, our goal

Assuming any reduced pollution effect of Covid19 is temporary – and we hope it isn’t – and post-pandemic carbon dioxide levels in the atmosphere continue to increase at this rate, a doubling (compared to pre-industrial levels) could come as early as 2080, locking in an eventual global average temperature rise easily great enough to cause societal collapse. Admittedly, this is a worst-case scenario, but past experience has shown that global heating and climate breakdown observations typically meet, and often exceed, earlier worst-case predictions.

As if to confirm the runaway speed with which climate breakdown seems increasingly likely to progress, the results of a third study, published in the journal Science provided evidence for the Antarctic ice shelves being far more unstable than previously thought3. The new evidence, from sea-bed landforms, shows that around 12,000 years ago, when the Earth was warming rapidly after the last ice age, the ice shelves were melting back at the astonishing rate of six miles a year, at least five times the current rate.

As the ice shelves are floating on the ocean, their melting does not add to sea-level rise (frozen water has a greater volume than its liquid equivalent). The problem is, they are the only things holding back the glaciers further inland. If the ice shelves go then so, eventually, do these, adding to the oceans, and accelerating sea-level rise. Around the time that the post-glacial ice shelves were retreating at their fastest, global sea-levels were climbing at up to 6cm a year – 12 times the current rate.

This final dose of bleak news brings me full-circle. The more forensically we examine global heating and resulting climate breakdown, the disastrous the picture becomes. This is why it is absolutely critical that we make the most of the hiatus provided by Covid19 to reboot society and economy so as to make slashing emissions, not promoting unsustainable growth, our goal. It is not exaggeration to suggest that this might well be our very last opportunity to avoid a hothouse Earth that will tear our civilisation apart.

Bill McGuire is Professor Emeritus of Geophysical & Climate Hazards at UCL and a co-director of the New Weather Institute. His novel, SKYSEED, about geoengineering gone wrong is published by The Book Guild in September.

One thought on “Is the climate worst case getting worse?”