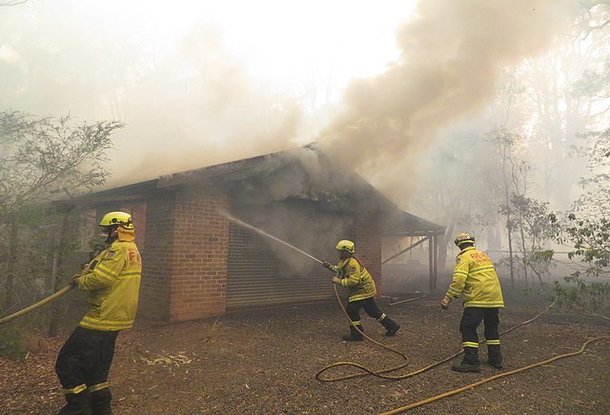 Australia is a canary in the coal mine of global heating, Bill McGuire, Prof of Geophysical & Climate Hazards and New Weather co-director, unpacks the irony that one of the world’s least welcoming nations to migrants, could shortly find many of its citizens seeking shelter and succour elsewhere.

Everything about Australia is big, from the scale of the country – more than 30 times the size of the UK – to its larger than life entertainers and sports personalities, and even its weather. Decade-long droughts, biblical floods and tennis-ball sized hailstones have long been a fact of life in this land of extremes. The problem is, the consequences of global heating and climate breakdown are bigger here too. Australia is no stranger to high temperatures and bush-fires, but recent years have seen both hit unprecedented levels, bringing fears that this is a country that has no long-term future on a hothouse planet. I have always thought of Australia as essentially a desert with a few green bits around the edge. On an overheating world it was always going to be the case that the green bits would ultimately be browned and crisped by fire and heat, and so it is proving.

In recent years, as temperatures have rocketed, the bushfire season has taken on a terrifying life of its own.

While still early Summer down under, the record for the highest temperature recorded across the country has already been well and truly smashed twice in as many days; the mercury touching an average of 41.9°C on December 17th, a full degree hotter than the all-time high set the 24 hours earlier. Astonishingly, with most of summer still to come, some places have already recorded temperatures within a whisker of 50°C. And with the extraordinary heat have come the fires, fed by tinder-dry vegetation and driven onwards by hurricane-force winds of up to 120km an hour. By the end of December, fires had turned to ash an area larger than Denmark and they show no sign of slowing down. The fact is, this is nothing new. In recent years, as temperatures have rocketed, the bushfire season has taken on a terrifying life of its own. In 2009, fires took more than 180 lives and properties are razed to the ground now on an annual basis. But in a record going back 150 years, nothing has approached the scale and ferocity of the current fires, so early in the season.

As I write this, the temperature has topped 40°C in every state and out of control fires are roaring through a string of towns along the coastline of Victoria State, forcing thousands to flee their homes and seek safety on the beaches. The fires are so big now that they are spawning their own weather. Giant pyro-cumulonimbus clouds tower above the flames, sending down dry lightning capable of starting new fires, thereby threatening to make the conflagrations self-sustaining.

Awful as the situation is, it is made far worse by the fact that this is a country that is governed by people in denial about anthropogenic climate change and about the role it is undoubtedly playing in driving recent bushfire activity through modification of regional weather patterns. Australia’s carbon emissions in 2019 are the highest on record for the country. At the same time, the government still stands foursquare behind the coal industry, pushing for the opening of new mines – even at the expense of the Great Barrier Reef – and upping exports of coal to be burnt by other countries. These exports mean that Australia is already responsible for five percent of global greenhouse gas emissions, and this figure is forecast to reach a staggering 17 percent by 2030. So, while the country burns and its people die, the big corporations make fat profits and the government can point to a healthy balance sheet. So that’s OK then.

The great Murray-Darling River System, so crucial for agriculture and water supplies across much of the country, is drying up

Clearly it isn’t. What it is, is an insane policy that sets Australia and the world firmly on the path to hothouse conditions that threaten societal breakdown. And its government and people should be in no doubt that Australia will be hit soonest and hardest. It’s not just the cataclysmic fire threat, but also the availability of water that could sound the death knell for this nation. Poor water management combined with global heating is having a massive impact on water resources. Severe drought conditions have meant that the great Murray-Darling River System, so crucial for agriculture and water supplies across much of the country, is drying up. Drought conditions across South East Australia now threaten the supply of water to more than a dozen towns that face a high risk of running out. Ludicrously, schools have run out of water in areas where Coca Cola is sucking aquifers dry for commercial bottling.

How bad do things have to get before the government begins to take global heating seriously?

Realistically, looking ahead to 2030 and beyond, things can only get worse. The question is, how bad do they have to get before the government begins to take global heating seriously and puts in place the measures that the climate science says is needed? Sydney is at risk of the reservoirs that provide its water running dry by 2022. Maybe that will do it? Or, perhaps the razing to the ground by bushfires of Canberra, the nation’s capital? In any case, it is highly unlikely that even dramatic action to slash national and global emissions will do much now to dig Australia out of the hell-hole that it finds itself in. It is perhaps ironic that – as life becomes increasingly unsustainable – one of the world’s least welcoming nations could shortly find many of its citizens seeking shelter and succour elsewhere.

One thought on “Is Australia becoming uninhabitable?”