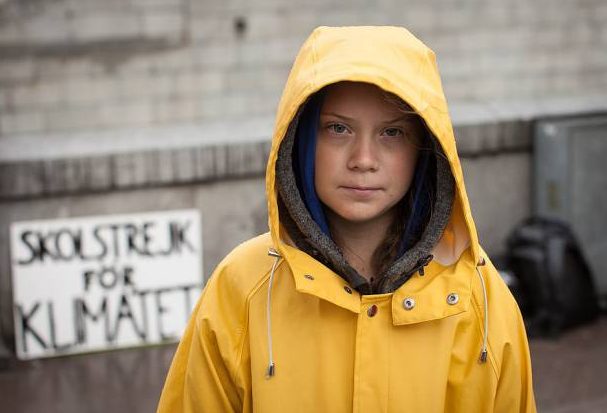 “All you can talk about is money and fairytales of eternal economic growth. How dare you!” Greta Thunberg, addressing the United Nations, September 2019.

It could be something taken straight from a folk or fairy tale. A young child with a gift for seeing the truth, and the courage to tell it, sails across a great wide ocean to a land with a palace where the most powerful people on earth gather. Fearlessly, she berates them for the suffering their complacency is causing and the perils people face as a result. Then she tells them what to do: act on the science of the climate emergency.

Most powerful of all, and again like something conjured from a firelight story, her impact comes from a complete lack of guile. Her earnest delivery comes unfiltered, straight from the heart. The directness is part of what she calls her ‘gift’.

Because the Swedish schoolgirl, Greta Thunberg, has Asperger’s Syndrome. She describes herself how one consequence of this condition – the difficulty she finds in being with others – contributed to her decision to begin the lone protest which sparked a global movement. Another effect is that she holds herself to very high standards and expects others to do so too. She does not set out to please people or be liked, and is not interested in excuses. The tale continues.

Greta’s approach was coolly logical, she questioned why she should attend school and listen to teachers when politicians weren’t listening to the facts. She committed to strike each week until the politicians acted.

It’s ironic that the young woman, whose recent life carries the contours of a slightly unlikely story, rightly accuses the powerful of believing in ‘fairy tales of eternal economic growth’. Of course, she is right. ‘Fairy tale’ is a synonym for something that cannot exist in the real world. Much the same is true when something is described as being an ‘old folk tale’ – it is not to be believed. Both types of story, however, aren’t meant to be plausible in their worldly details; they are about revealing deeper truths.

‘Stories are one of the most ancient and most effective ways of making sense of the world,’ wrote the author Philip Pullman in a foreword to the first collection of stories in this series

There are plenty of myths, fables, folk and fairy tales that warn of the destructive power of greed and of disregarding natural limits. From the Midas touch to the flight of Icarus, King Canute’s inability to halt the incoming tide, and the abuse of the goose that laid the golden eggs, there is wisdom embedded in our cultural heritage that could better guide us.

Another function of folk tales, written about in the introductions to our previous story collections – There was a knock at the door and Knock Twice – is to help people come to terms with extremes of human experience. Tales often have their roots in times of struggle, during wars and the famines that result from them.

In the light of our current political and ecological upheavals, and the great displacements of people driven by climate extremes and blocked by intransigent borders, we need new tales more than ever for this reason.

But even greater, as the forms of an old culture of unbounded consumerism die, we need new stories to help us imagine and make the rapid transition to a different future. ‘Stories are one of the most ancient and most effective ways of making sense of the world,’ wrote the author Philip Pullman in a foreword to the first collection of stories in this series, adding: ‘When we try to live a good life in a world we seem to be simultaneously destroying, there is nothing more valuable or worth encouraging.’

In this regard, nothing has changed since our last collection. In other, very important ways, many things have. Partly because of the real life tale of a Swedish child with a very special gift, the world is dramatically more aware of the critical threats to the biosphere and our life support systems. Millions are taking to the streets and taking risks to push for change from below, because those on high have failed to act on the science.

There are too many rich tales in our new collection, Knock Three Times, to pick out any one, but we can guarantee you a rich and surprising variety. All, in different ways, seek to reveal a truth or light the way ahead. We invite you to knock three times on this book, turn the page, and begin a journey that may contain some peril, some surprises and doors that may open, hopefully, to new possibilities. Although to sometimes highly differing degrees, this is the prospect and predicament facing us all.

You can buy a copy of Knock Three Times as a paperback from our partners at The Real Press, on epub from the online bookshop Hive, on kindle – or all three books together (adding There was a knock at the door and Knock Twice) at a reduced price of £5 off.

In Knock Three times you will find: