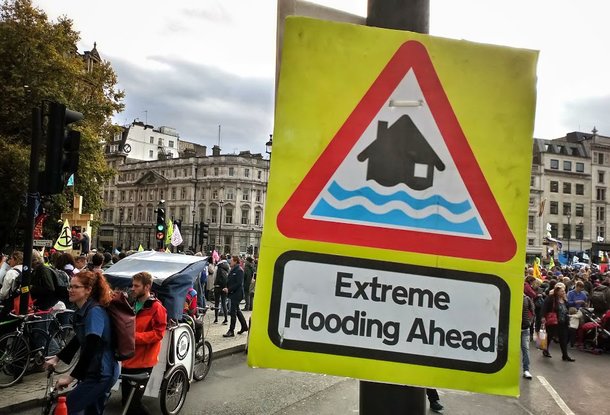 In the battle against global heating and climate breakdown there are, at present, two front lines. The first is in central London and another sixty or so cities across the planet, where Extinction Rebellion protesters face the police; upholders of state authorities that refuse to treat the climate emergency sufficiently seriously to take the action that the science demands.

The second is where the land meets sea. Yes, we are seeing severe drought, biblical flooding, calamitous storms and blistering heat-waves, but the planet’s most demonstrative and consistent response to global heating is – without doubt – the relentless rise of the oceans and their steady encroachment upon the world’s coastal zones, which host almost 700 million people.

It is not an abstract threat. San Francisco International Airport is planning to spend $587 million on a ten mile wall designed to protect its buildings and runways from flooding as sea level rise raises water levels in San Francisco Bay. The irony of aviation having to protect itself from the effects of global heating driven by its own pollution will be lost on few.

Because annual sea-level rise is (at least so far) measured in millimetres, and because it can differ from one part of the world to another, determining the rate of rise is far from straightforward. What we do know, however, is that sea-level has risen by about 20cm since the beginning of the 20th century. We also know that the rate of rise is increasing, with 7.5cm added to global sea levels between 1993 and 2017 alone. Over the course of much of the last century, rising sea levels were largely a consequence of the thermal expansion of the oceans, as they absorbed the heat associated with global heating. Now, year-on-year, melting ice sheets in the polar regions are adding more and more to the total, and this contribution is becoming increasingly obvious.

Up to the mid-1920s, the annual rate of sea-level rise averaged out at 0.8mm. Between then and around the early 1990s, this rate climbed to a fraction under 2mm a year. After 1992, annual global sea-level rise exceeded 3mm, and in the last few years the annual rise has reached half a centimetre. These rises may not sound like much in their own right, but it is how quickly the rate is accelerating that we should be worrying about.

For example, if the current rate of rise doubled every decade, global sea level would be climbing by 1cm a year in 2030, 2cm a year in 2040, 4cm in 2050 and so on. Such a progression is said to be exponential, so that although the initial rise is small, the constant growing rate (doubling time) ensures that increases quickly become very large. A doubling rate of a decade, therefore, would see sea-level climbing by nearly 1.3m a year in 2100, with every coastal town and city drowned long before this.

Painting a picture that stands a fair chance of being rosier than reality is not only irresponsible, it is also dangerous.

There is no evidence that such a scenario is likely to play out quite like this, but the accelerating rate of sea-level rise in the last few years, alongside similar accelerations in the rate of ice melting are very worrying. Across West Antarctica, for example, the rate of ice loss tripled in just the five years between 2012 and 2017. If this rate of increase in ice melting is maintained, then by the mid 2040s, global sea level will be rising by 5cm a year – half a metre a decade. Such a picture seem extreme when coastal defences and infrastructure are built to withstand much smaller changes, but it fits with the findings of a number of scientific papers published over the last few years that suggest global sea level could be two, three or even more metres higher at the end of the century. It is surprising, therefore to read that, in the new IPCC Special Report on the Ocean and Cryosphere in a Changing Climate, the IPCC plumps for a worst case sea-level rise of 110cm by 2100.

As the melting rates of the Greenland and West Antarctic ice sheets begin to crumble more rapidly than expected, this modest figure is coming to be regarded as too optimistic. Inevitably, due to the requirement for scrutiny and consensus, the IPCC reports are always conservative, but – increasingly – this is seen as unhelpful. Everyone would agree that scaring the hell out of people is not a good approach, but neither is a failure to acknowledge how bad things could get. Based upon examination of the relevant peer-reviewed literature, an end-century sea-level rise of 110cm is clearly not the worst case. Not by a long way.

Painting a picture that stands a fair chance of being rosier than reality is not only irresponsible, it is also dangerous. As well as driving public perception of what global heating and climate breakdown will mean for them and their descendants, IPCC- vetted predictions underpin the management and mitigation policies designed to keep people and infrastructure safe in a climate-changed world. Planning for a 1m sea-level rise in 2100, when this level of rise may be upon us decades earlier, is clearly problematic; likely leading to the swamping of coastal communities with little time either to adapt or manage a retreat.

So, IPCC, lets see the full picture, not one that is selective and toned down. Caveats can be attached, the more extreme forecasts could even be included in separate addenda, but barely acknowledging their existence not only panders to those vested interests keen to play down the global heating threat, but also puts a spanner in the works of those seeking to draw up effective plans to protect the world’s coastal towns and cities.