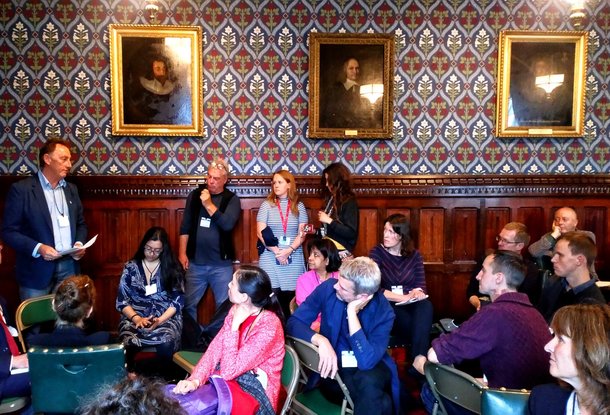 Extinction Rebellion held a People’s Assembly in Parliament to identify new priorities for each government department, this is an adapted from Andrew Simms’ short speech on the challenge to the Treasury

When he led the Treasury as Chancellor of the Exchequer, Gordon Brown used a standard joke to warm up the audience at the start of his speeches. He’d say, there are two types of Chancellor – those who fail and those who get out in time. It usually got an indulgent laugh, but the best entertainment was watching his aides who had to be amused while pretending that they hadn’t already heard it countless times.

Now we face the challenge of escaping from a climate and ecological emergency by ‘getting out in time’ from our divisive and fossil fuel dependent economy, and possibly one of the greatest barriers, and reasons that we might fail, is the Treasury itself.

The reason, simply, is that the Treasury holds the public purse strings. It can start or stop things from happening by allowing or restricting public investment – which in turn sends a stop/go signal to the private sector. It is the arbiter of departmental spending, the spider at the centre of the web of government.

The web itself is spun by the Treasury’s Green Book – this is the document and set of appraisal procedures by which the department says yes or no to spending decisions, in its own words it provides ‘definitive analytical guidance for government’. To cut a very long story short, it currently presents an impenetrable barrier to change at the speed and scale needed for the UK to make its contribution to preventing climate breakdown. It does that by using models, market prices and assumptions that favour short-termism and business as usual over necessary economic transformation and fail to understand either climate risk or the economic opportunity of action.

Jamie Driscoll the new ‘Metro’ Mayor for the North of Tyne, declared a climate emergency on his first day in office. He points to the centralised constraints on public spending overseen by the Treasury as being his main obstacle to implementing a plan for rapid and socially just transition.

Front bench opposition spokesperson on the Treasury, Clive Lewis MP, who has special responsibility for climate change, agrees and has said that he wants to change the programming of the Treasury’s Green Book, so that the computer says yes when we want measures to rapidly decarbonise the economy.

it uses models, market prices and assumptions that favour short-termism and business as usual over necessary economic transformation

In spite of claims to have made progress in incorporating environmental considerations, the Treasury’s animosity to climate action was revealed when Philip Hammond, then the Chancellor, poured cold water on Theresa May’s, the Prime Minister at the time, setting of a UK net-zero carbon target for 2050. It would be too expensive he said – randomly picking a figure of £1 trillion – to do what had to be done, adding that it take money away from schools and hospitals. As if climate action wasn’t necessary to protect the future of children going to school or for the health of the nation.

The Treasury understood the need to act to prevent the economy collapsing during the financial crises of 2007-2008. And when economies do collapse there are things that you can do – insolvency procedures, debt cancellation, using credit and savings to invest and protect balance sheets. These options are not available if ecological collapse happens. Nature, as has been famously noted, doesn’t do bail outs. Action is needed in advance. And, because of time lags in the biosphere, we need to invest now to avoid catastrophe decades away. Even though many internationally are already suffering from climate extremes and Britain too is now feeling too extremes made greater and more frequent due to global heating.

Parts of the UK media complain that Extinction Rebellion ‘creates chaos’ when it closes down parts of London. They fail to see that in acting to push action on climate breakdown up the political and economic agenda they are in fact taking us to a place of lesser chaos. It’s worth remembering that in 2006 during his Mansion House speech, barely months before the worst financial crisis of the modern era began, Gordon Brown boasted about ignoring the ‘siren voices’ who said that the City of London and finance more broadly needed greater checks and balances.

The actual real world of nature, soil fertility, forest regeneration and a healthy functioning biosphere doesn’t figure in the calculus of the type of people who tell you to live in the real world

Behind the barriers posed by the technocratic Treasury models are deeper ideological obstacles. People seeking the kind of progressive changes needed to transform economic life in Britain have been told for so long to ‘live in the real world’, meaning that the changes they seek are impractical. But that never meant living in the actual real world of planetary boundaries and ecological life support systems. It meant the world of unaccountable finance, of magical thinking that assumes infinite growth is possible, and of markets which are protected from their own failures, and even use them to more deeply embed policies that preserve and promote their disproportionate privileges.

The actual real world of nature, soil fertility, forest regeneration and a healthy functioning biosphere doesn’t figure in the calculus of the type of people who tell you to live in the real world – it remains an externality – something still left out of the Treasury models.

For example, if we included the climate damage costs of the fossil fuel companies on their books, they would be effectively bankrupt. The oil company BP’s promised nearly 20 years ago that it would go ‘beyond petroleum. Its new CEO, Bernard Looney, will preside over a company which is estimated still to invest the vast majority, around 97 percent, of its capital expenditure in fossil fuels. It would be ironic if he brought sense to the company, not because of his name, but because he comes to the post as the former head of ‘upstream’, the exploration and production arm of the company charged with finding and developing more oil and gas fields.

Key figures in other arms of managing the UK economy, such as Mark Carney, governor of the Bank of England, are more acutely aware of the need for change. Writing jointly with the head of the Banque de France, Francois Villeroy de Galhau, he recently called for “a massive reallocation of capital”, adding that, “If some companies and industries fail to adjust to this new world, they will fail to exist.”

He argued that those with their hands on the economy’s levers need to: 1. Integrate climate-related financial risk into daily monitoring 2. Integrate carbon targets into portfolio management 3. Share climate risk data and 4. Add in-house capacity to make these tasks real

These measure he argued were needed to, “help avoid a climate-driven “Minsky moment” – the term we use to refer to a sudden collapse in asset prices”, and he encourages regulators to develop an adequate classification system to, “identify which economic activities contribute to the transition to a green and low-carbon economy.”

The ‘definitive analytical guidance’ provided by the Treasury’s Green Book fails to do this, but it is very good at approving economic activities which do the opposite.

In controlling the public purse strings the Treasury is central in telling departments, and by implication the nation as a whole, to live within their means. Yet the Treasury has no concept of the biosphere’s budget that we must operate within

Timed for the first day of the current Extinction Rebellion protests, the Department for Business, Energy and Industrial Strategy (BEIS) tweeted that it understood, ‘the urgent need to tackle #climatechange and protect our planet’, boasting of the legislation ‘to end our contribution to global warming entirely by 2050.’

But the problem is a convoy of commitments which do exactly the opposite, including, but not limited to: aviation expansion, the development of fracking, a legal obligation to drain every drop of oil and gas from the land and sea, implacable opposition to onshore wind power, a subsidy cut and rise in VAT on domestic solar energy, overruling planning advice that warned against adverse impacts on emissions to approve a proposed 3.6GW gas plant at the Drax power station, dropping home insulation incentives meaning that at the current rate, the government won’t meet its own fuel poverty reduction targets for 96 years, and the fact that, according to a January 2019 European Commission report, the UK spends £10.5 billion a year in fossil fuel support or ‘subsidy’.

In controlling the public purse strings the Treasury is central in telling departments, and by implication the nation as a whole, to live within their means. Yet the Treasury has no concept of the biosphere’s budget that we must operate within – or of the equitable distribution of resources within that.

In a conservative estimate, humanity as a whole started living beyond its means earlier in the year during 2019 that ever before, Earth Overshoot day fell on July 29th.

But from a domestic perspective the picture is much worse. The UK consumes four times its domestic biocapacity making it heavily dependent on the rest of the world for resources, and on many countries where, per person, consumption levels are much lower. As Martin Luther King pointed out in 1967, “Before you finish eating breakfast in the morning, you’ve depended on more than half the world.”

So what should the Treasury do? Quite simply it should set the economy on a socially just course to operate within the ecological boundaries compatible with the maximum warming of 1.5° approved as part of the Paris climate agreement. And, if they want to know what that might mean in practice, they could look at and support the Green New Deal Bill (formerly the Decarbonisation and Economic Strategy Bill), introduced to Parliament by the MPs Caroline Lucas and Clive Lewis.

Specifically they could end or switch fossil fuel subsidies to finance the just transition and conversion of industries affected by decarbonisation. They could update their models to include the biosphere, make realistic assessments of likely feedbacks and impacts. They could at least follow Carney’s advice. If a company was run with no idea of its cash flow, stock and capital depletion and depreciation, you wouldn’t be surprised if it went bust. But this is how the economy overseen by the Treasury is so blithely treated in terms of our use of nature. When it lectures people about living in the real world, it needs to make sure that it is actually talking about the actual real world of fields, forests, rivers, seas and thin layer of liveable atmosphere. It needs to plan for an economy which fits the shoe size of the planet.

We need the Treasury to change and support a rapid transition because the science tells us we have a one-off, decadal opportunity to prevent the slide towards climate breakdown, because, to repeat, nature doesn’t do bail outs

We need the Treasury to change and support a rapid transition because the science tells us we have a one-off, decadal opportunity to prevent the slide towards climate breakdown, because, to repeat, nature doesn’t do bail outs. As the economist Simon Wren-Lewis recently wrote pointedly in support of the Green New Deal, “No one in 100 years’ time who suffers the catastrophic and irreversible impact of climate change is going to console themselves that at least they did not increase the national debt. Humanity will not come to an end of we double debt to GDP ratios, but it could if we fail to combat climate change.”

New Weather @NewWeatherInst
RT @AndrewSimms_uk: School exam question: You're hosting a climate conference of planetary importance, do you? a. make polluting short-ha…
(about 13 hours ago)

New Weather @NewWeatherInst
RT @AndrewSimms_uk: Billions on roads, cut to planned fuel duties, and tax cuts on 'domestic' flights - is this the Chancellor's two-finger…
(about 1 day ago)
Follow @NewWeatherInst