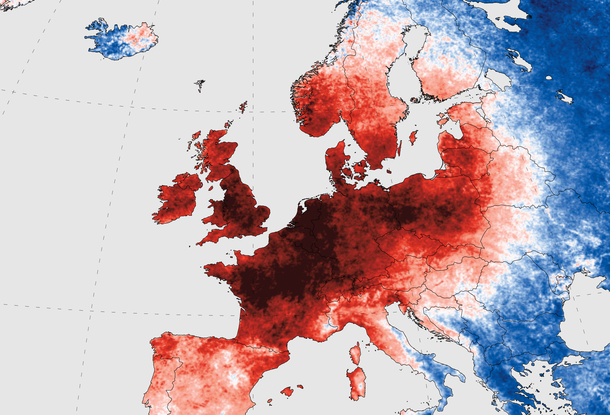 Bill McGuire writes that it is time to ‘Shout it from the burning Arctic, pop the luke-warm champagne!’ As the second blistering heatwave of the summer sets in and the streets of the capital begin to melt, we can celebrate one thing at least…

At long last the facility now exists to attribute a particular extreme weather event – in real-time (pretty much) – to climate breakdown driven by anthropogenic global heating.

It provides an immediate hard-science, evidence-based, riposte to climate breakdown deniers at a time when they are at their most pernicious, seeking to downplay or obfuscate any global heating link.

Climate scientists have long been frustrated by an inability to point to a particular flood, storm or heatwave – when it’s actually happening or at least soon after – and say, yes, that is global heating in action, or rather that the chances of it happening in the absence of such heating would be far smaller, which – in reality – amounts to the same thing. It is no small advance to be able to point the finger of blame shortly after an especially memorable weather event, when it is still big news and – perhaps more importantly – still at the front of people’s minds. It also provides an immediate hard-science, evidence-based, riposte to climate breakdown deniers at a time when they are at their most pernicious, seeking to downplay or obfuscate any global heating link.

So when – within just a few days – scientists were able to confidently confirm that anthropogenic heating made June’s European heatwave between five and 100 times more likely, people, and hopefully governments, are still listening and taking note. Maybe it’s just coincidence, but while this attribution made headlines across the world in almost every media source of note – print or broadcast – I have yet to come across a single story down-playing the connection. No doubt some denialist muttering about the heatwave flickered across neoconservative websites and facebook pages, but this is largely irrelevant. If rapid attribution is spiking the deniers deliberate misdirection in the mass media, at a time when extreme weather is in the limelight, then that is a big victory.

Getting to this point, however, has been a slow business. Close to a thousand attribution studies have been undertaken this century on extreme weather, but until quite recently, attributing a particular episode to climate breakdown was a time-consuming business, typically requiring several months of data analysis and modelling, before arriving at a robust conclusion.

Even then, the results needed to be written up, submitted to an appropriate journal, peer-reviewed and quite likely revised, before publication in an academic publication that no-one outside the field would ever read. Take-up by the media was poor and haphazard and the results rarely – if ever – trumpeted in the tabloid press or broadcast media. Consequently, they did little or nothing to enlighten the general public about the ever-increasing role of global heating in driving extreme weather.

In 2003 a heatwave in France caused thousands of premature deaths. Many suspected the fingerprint of human driven warming, but the science wasn’t quite ready to draw quick conclusions. Temperatures this week in Paris are set to break records and this time we are ready to demonstrate the connection in almost real time.

The key development came with the establishment, in 2015, of the World Weather Attribution (WWA) initiative; a partnership between the University of Oxford’s Environmental Change Unit, The Royal Netherlands Meteorological Institute and the Red Cross Red Crescent Climate Centre. The job of the WWA is to conduct real-time attribution analysis of extreme weather events as they happen, so that clear connections between anthropogenic global heating and floods, droughts, heatwaves and storms can be made and proclaimed while people are still listening and open to the information. An earlier attribution analysis by the WWA revealed that the torrential rainfall from Hurricane Harvey, in August 2017, which caused massive flooding across large parts of Texas, was made three times more likely as a result of climate breakdown arising from global heating – and 15 percent more intense. Similarly, the likelihood of the sustained drought that brought rationing to Cape Town last summer, was tripled for the same reason.

In 2003 a heatwave in France caused thousands of premature deaths. Many suspected the fingerprint of human driven warming, but the science wasn’t quite ready to draw quick conclusions. Temperatures this week in Paris are set to break records, and this time we are ready to demonstrate the connection in almost real time.

Now that the tools are available, it should be possible to answer – almost at the drop of a hat – the question that inevitably accompanies any episode of extreme weather these days. Is it the result of climate change? As global heating and climate breakdown continue to ramp up, I am confident that the answer, in virtually every case – including the current heatwave – will prove to be, alarmingly, yes.

One thought on “Global heating? Climate breakdown is now coming to you in real time…”