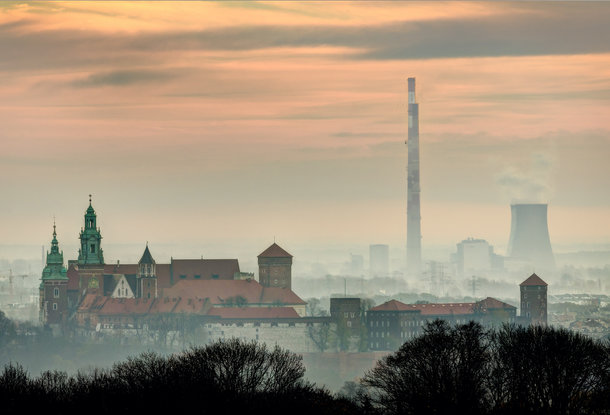 On 5th December 1952, a great smog enveloped London, England, killing thousands, which led quickly to the passing of the Clean Air Act. That date is now marked by Smog Day which was welcomed by UN Environment at its launch in 2017, to remember the victims of poor air quality and focus on joint solutions which also tackle climate change. Yesterday, extraordinarily, it fell as news broke that global carbon emissions, driven by coal burning and transport fuels, hit an all time high. And, nearly seven decades later, there are still around 10,000 premature deaths in London due to air pollution.

Winter is becoming a time of year that children will associate more with wearing face masks than throwing snowballs.

And things are worse in Poland, which is either the least, or most appropriate place in Europe to be holding the 2018 international climate talks. It has been described as having a ‘love affair’ with coal, the most polluting of the fossil fuels, and is home to 33 of the 50 most polluted cities in the European Union, and eight out of ten of EU homes still burning coal.

Unsurprisingly, smog is common in Winter, and the city home to the climate talks, Katowice, now uses drones to survey the smoke coming from households burning coal.

Choosing Katowice to host the talks could then, either be a stroke of genius to highlight the problem and model the process of change, or a short-sighted public relations disaster stripping credibility from the negotiations.

Poland itself opened the conference calling for a pathway of ‘just transition’ allowing those still dependent on fossil fuels a period of time in which, supported, they can convert to other energy sources and industries. The declaration though, as well as being non-binding, has been seen by some as tactic to win yet further subsidy for an already heavily subsidised energy sector, more likely to slow the process of change. The sense of doubt was underlined when the first sponsor of the climate talks was revealed to be one of Poland’s biggest coal companies, Jastrzębska Spółka Węglowa (JSW).

But in Poland, like everywhere else in the world, the immediate human cost of air pollution is unavoidable. Illnesses linked to air pollution kill an estimated 48,000 each year in Poland, and six out of ten Polish kindergartens are in areas of high pollution, and children are especially vulnerable to poor air quality. Winter is becoming a time of year that children are likely to associate more with wearing face masks than throwing snowballs.

With the science of climate change bringing ever worse assessments of climate breakdown the question hangs thick like smog in the Winter air, of what more we can do to create the conditions for change. One answer is the need to reconnect with nature itself and the seasonal round which conditions it. Another is the need to connect with each other to form alliances for rapid transition that are socially just.  On the second point we are delighted to see the launch of the new Rapid Transition Alliance. On the first point of connection, what can we do to campaign in tune with nature and the seasons to make our efforts towards change more effective?

Why We All Need Some Seasoning

We are seasonal creatures. As the Earth goes on its annual journey around the Sun, its’ idiosyncratic spins means we receive different levels of light and warmth. It is this that structures our year into spring, summer, autumn and winter. All four of these seasons are deeply coded in our culture, most clearly in the Christian calendar. Christmas takes place only a few days after winter solstice, when the hours of sunlight have reached their most meagre. This celebration of the birth of Jesus comes as a marker of the sun’s rebirth, building on the earlier Roman festival of Saturnalia.

Yet we are far less seasonal than we once were. Our lives are increasingly indoor, centrally heated and air conditioned with little determined by the seasonal cycle. Farmers make up a tiny percentage of the workforce and supermarkets now provide all-year availability of foods that once we could only enjoy for a few weeks at a time. Today, our year is largely structured by the logic of consumer capitalism. This has successfully occupied previous national and religious milestones such as Easter and Christmas, along with Thanksgiving in the USA. Indeed, Thanksgiving has become just a foretaste to Black Friday, the busiest shopping day of the year in America; it has also become international Buy Nothing Day. The seasons are not just being masked, they are also being disrupted by pollution. The malignant layer of carbon dioxide we’ve pumped into the atmosphere is trapping the sun’s heat and driving climate change. Last year, I had bright red poppies in my London garden in November, months after their traditional flowering season. In Greenland, where this heating is amongst the fastest in the world, one species of sedge is marking the arrival of spring 26 days earlier than just a decade ago.

Patterns of interaction between animals and plants that have been slowly built up over centuries are being overturned in a few years, separating species from their expected sources of nutrition and further accelerating the planet’s loss of natural richness.

The burning of fossil fuels has also created a new season of smog that stretches across Eurasia in the early winter. This is the time when air pollution and winter chill combine to bring the now infamous ‘airpocalypse’ to cities such as Beijing and Delhi. In Pakistan, environmentalists now refer to this deadly period around November as a “fifth season”.

Since the turn of the century alone, over 70 million have died prematurely from air pollution, a leading cause of mortality that spikes each winter.

Many of us are working to slow this destruction and build a sustainable society. But the ways in which we to act to regenerate nature are by and large abstracted from the seasonal foundations of our lives. We make annual contributions to environmental charities; we may volunteer time in the summer, when it’s warmer. But our disconnection from the seasons means that we have lost the touch with the natural calendar. We’re therefore surprised when hurricanes hit the global headlines in August and September and yet this is a regular seasonal pattern.

There is certainly no shortage of individual days designed to spur social and environmental awareness. The United Nations has a list of almost 150 official international days, many of them associated with sustainability, from World Water Day on 22nd March to World Environment Day in 5th June and World Soil Day on 5th December. Yet there is no clear logic as to why these days are connected with the issue of concern.

The one exception is Earth Day. At the outset, this had strong seasonal roots. Back in November 1969 at the UNESCO Conference on the Environment in San Francisco, local peace activist John McConnell proposed that a special day should be set aside to honour the Earth. This won wide support and the first Earth Day took place the following year on March 21, 1970. This was specifically designed to coincide with the vernal equinox, traditionally the first day of spring in the northern hemisphere.

Only a month later on 22 April 1970, a second, much larger Earth Day took place, mobilising more than 20 million Americans to demonstrate for a healthy environment. And it is 22 April that is now marked internationally as Earth Day, and since 2009, led by Bolivia, also proclaimed by the UN General Assembly as ‘International Mother Earth Day’, in reference to pioneering legislation in Bolivia to promote the rights of nature.

We know well how the religious and commercial calendar can drive our behaviour in powerful ways. Fasts such as Lent and Ramadan prompt believers to give up desirable things and achieve something together with others that is normally difficult on one’s own. Consumer festivals such as Christmas also have a profound impact on what we do, in this case often driving excess spending, much of it unwanted and wasteful, both financially and materially.

It’s time for us to employ the cycle of the seasons to inspire environmental action and strengthen our relationship with Nature. In place of isolated days, we could create seasons of activism to accelerate the sustainability transformation we need. Each season would need to be immediately obvious, linked to what is going on in the both localities and the wider globe. Each could stretch over months, bringing together noisy festivities as well periods for reflection, community engagement as well as changes in personal lifestyle, political campaigns as well as special ceremonies of both celebration and grief.

For those of us in the northern hemisphere, this cycle could start on the Winter Solstice of 21 December with the Season of Conservation. This would focus on activities that highlight our need to conserve the Earth’s resources, building on existing milestones such as Dry January, Veganuary as well as the Lenten fast. With the Spring Equinox on 21 March, we would move into the Season of Renewal – with Earth Day at its centre – highlighting the return of light and warmth with high-profile events to replace fossil fuels with renewables, hold street by street retrofitting festivals and community planting programmes.

The aim of Smog Day was to remember all the people who have died prematurely because of air pollution – and to inspire action to clear the air.

The Summer Solstice of 21 June could then mark the beginning of the Season of Heat, when we focus our attention on the reality of global warming, remembering the millions whose lives are already damaged by climate change, using the onset of Atlantic hurricanes to highlight the consequences of extreme events. With the Autumnal Equinox on 21 September, we enter the Season of Abundance, a familiar time of harvest festivals. For example, we already have Apple Day on 21 October introduced by Sue Clifford and Angela King at Common Ground, to celebrate Britain’s vast diversity of apples. For Christians, this season could also centre on the feast of St Francis’ on 4 October, which now coincides with World Animal Day.

Yet as this season turns into winter, it has the darker side of peak pollution. Last year on 5 December, as mentioned above activists in London and Delhi held the world’s first Smog Day on the 65th anniversary of the last great smog in London in 1952.

The aim of Smog Day was to remember all the people who have died prematurely because of air pollution – and to inspire action to clear the air. This day of loss could then be combined with 12 December, the day of the finalization of the Paris Agreement on Climate Change, itself just nine days before the Winter Solstice.

Harnessing the seasons in this way would help to counteract the erasure of nature in our lives and make new links in our communities and with peoples around the world. If we are to make sustainability a lived norm, then we all need seasoning.

Nick Robins is Professor in Practice for Sustainable Finance at the Grantham Research Institute and Andrew Simms is co-director of the New Weather Institute and coordinator of the Rapid Transition Alliance.