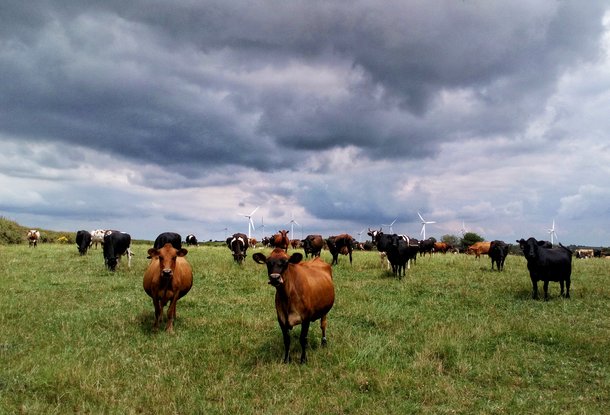 There is no shortage of evidence for humanity’s environmental crises. Data from a global catalogue of recent extreme weather events warns of a climate emergency. But is there also evidence for optimism? Paul Allen, project leader for the Zero Carbon Britain initiative, and a member of the soon-to-be launched Rapid Transition Alliance, writes here that yes, we do. In the largest survey yet of the potential of renewable energy, a new report from the Centre for Alternative Technology (CAT) shows that clean energy could now meet all our electricity needs, at all times of the day, and all year round…

To respond appropriately to the climate crisis, we first need to be sure the climate model we have in our heads is up to the task – whilst we call it ‘the greenhouse effect’, there are clear differences between the physics of a greenhouse and the physics of global climate change. For example, a greenhouse full of plants reaches a steady state fairly quickly, where heat lost equals heat gained. But the Earth, with its massive oceans and huge mountains –  its so-called ‘thermal mass’- holds heat and takes a long time to warm, so we will be on a rising temperature curve for decades to come. To make matters worse, our greenhouse is rapidly becoming double glazed, as our increasing emissions capture more and more heat. In addition, huge amounts of our emissions have already been absorbed by natural systems such as oceans and forests and if we push these to collapse, massive more amounts of emissions may be re-released. Finally, we urgently need to clean our air, removing health the damaging particulates that cause premature deaths, but that is much like polishing the glass in our greenhouse – it makes it work better and trap more heat. Every time we re-visit the greenhouse model in our heads, these serious dynamics need recognising. But once we have checked-out our model of the challenge – we must also examine the model we use to solve it. Sharing such a serious problem without also presenting the relevant solutions can drive people to reside in that reassuringly familiar BBC voice of Dad’s Army’s Private Frazier saying, “We’re doomed, doomed”. Frazer became famous for his bleak, pessimistic outlook. Such a mind-set leaves people in ironic detachment, meaning that any cultural pressure for the necessary shift in politics and economics evaporates. The focus then is misdirected towards building walls to stop refugees, scrapping international agreements, cutting overseas aid, growing national military budgets and focusing on nationalist power. Sound familiar or attractive? I don’t think so.

If we plan the transition right, there are massive opportunities to solve multiple problems simultaneously, for adaptation, resilience, health, jobs, well-being, equity and more.

But we can use evidence-based optimism, rooted in the scale of the challenge, to create the best future possible. Because, there is growing evidence that we do have the tools to minimise future climate risks, whilst also developing more resilient and equitable life support systems. Since 2007, I have been part of the Zero Carbon Britain team at the Centre for Alternative Technology (CAT). Initially focused on Britain, our work has broadened internationally, and now draws on examples highlighting much wider applicable lessons. It shows that we have all the technologies we need, and it has identified ways of overcoming many of the barriers to change. We do not claim that Zero Carbon scenarios will make all aspects of climate change vanish. We know there are massive, disruptive changes already locked into the system, but we can act now to minimise risks. And, if we plan the transition right, there are massive opportunities to solve multiple problems simultaneously, for adaptation, resilience, health, jobs, well-being, equity and more. By showing we have all the technologies needed, we give confidence to hesitant policy-makers and empower citizens to take action for change.

From Tanzania to Los Angeles, from South Asia to the Baltic we take an in-depth look at 18 case studies, and map over 130 scenarios, drawing on cutting-edge modelling work for net zero, deep decarbonisation, and up to 100% renewable energies.

CAT’s new Raising Ambition report Raising Ambition report adds more international perspectives to this story. Ever wondered what a zero carbon Australia would look like? Or how an archipelago of islands could become carbon neutral? Ever wondered what nations across the world actually need to do to have a good chance of avoiding a really serious hothouse earth? We have collated the work of hundreds of researchers around the world who have developed both snapshots and deep visions of possible climate-stable futures at the global, regional, national and sub-national scales. From Tanzania to Los Angeles, from South Asia to the Baltic we take an in-depth look at 18 case studies, and map over 130 scenarios, drawing on cutting-edge modelling work for net zero, deep decarbonisation, and up to 100% renewable energies.

Through sharing this work in the run-up to December’s international climate summit, COP24, CAT aims to stimulate economic and political debate around achieving zero emissions, engage the research community and get society thinking in new ways to help build consensus and coalition around action. Our research also showed that there is more to be done; too many countries cannot access the resources to prepare scenarios – for example we could only find 4 scenarios for African nations out of a total 54 countries on the continent. We must also go beyond just 100% renewable electricity – humanity needs to get to zero in transport, buildings, industry and agriculture. We found also that land-use is an underestimated asset, not only for sustainable agriculture, healthy diets and recreation, but also for natural carbon management.

Rising to such a major challenge helps us pull together for the best collective outcome, it un-leashes a powerful sense of common purpose, as we see in our responses to major floods or terrorist attacks. There are resources within ourselves, and in communities waiting to spring into action. Moments of crisis, like the one we face today as more and more of the mainstream media reflect the highly serious nature of the climate challenge, can allow us to come together and bring to life a stronger, collaborative and more cooperative global society.

You can read the Raising Ambition report at www.zerocarbonbritain.org