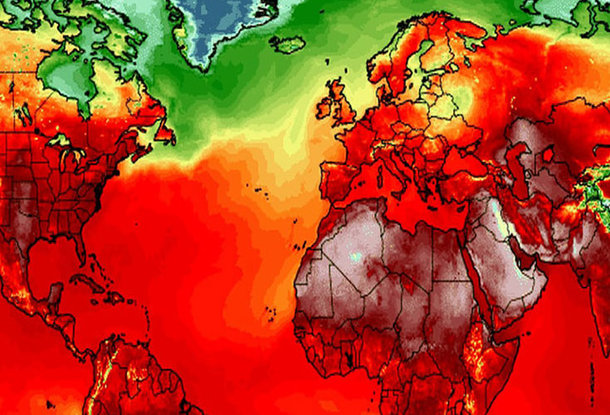 A record-breaking heatwave hints at a lethal new climate normal, writes Prof Bill McGuire, but you wouldn’t know as the obsession with Brexit drowns out real news

Nostalgia is gripping the political agenda and not in a good way, with Brexit harking back to an imagined Britain that never was and one of its leading advocates Jacob Rees Mogg MP dubbed the ‘Honourable Member for the 18th Century’. The symbolism of the government’s Brexit office, the Department for Exiting the European Union, physically displacing the former Department for Energy and Climate Change from its Whitehall building was bad enough.

But now, a media obsession with political faction fighting over Brexit has pushed climate change almost entirely from the news. Not even a record breaking heatwave in the Northern Hemisphere, striking from the US to Canada, Europe and the Middle East with lethal consequences, has been able to make much difference.

But recently, with a new batch of stamps commemorating the 50th anniversary of the much-loved television sitcom, Dad’s Army, about the Home Front during the Second World War, at least we can apply the pessimistic character Private Fraser’s perspective on the latest climate change news.

As our world continues to heat up, rising temperatures are not evenly spread across the globe. The land heats up more than the sea; higher latitudes warm more rapidly than the tropics and mid-latitudes.

This last peculiarity is especially concerning, as the vast majority of the Earth’s ice is lodged in polar regions, so that more warmth is rapidly translated into melting ice and rising sea levels. The crumbling Greenland Ice Sheet has been the biggest contributor to sea-level rise over the last few decades, losing between 190 and 270 billion tonnes of its mass every year. But a new study reveals that the Antarctic is now catching up fast.

As the Antarctic holds 90 percent of the world’s ice – sufficient to raise global sea levels by around 60 metres – this is not good news. While melting on this scale is not forecast – yet – the new melting rates determined from satellite observation are extremely worrying. In the course of just five years – from 2012 to 2017 – Antarctic ice loss has shot up threefold, from 76 billion tonnes annually, to a colossal 219 billion tonnes.

In total, more than 2.7 trillion tonnes of Antarctic ice has melted in the last quarter century, adding three quarters of a centimetre to global sea level. At the new rate, the contribution over the next 25 years would be 1.5cm. Not really too much too worry about. If, however, the rate of increase is maintained over this period, then the annual rise by 2043 – a single human generation – would be close to a catastrophic five centimetres a year.

And this is without the growing contribution from Greenland and from the increasing expansion of sea water as the oceans warm. It is not known how the melt rate will change in coming decades, but it is a sobering thought that if the rate of increase stays as it is, low-lying lands and all coastal population centres would be threatened with permanent inundation by the century’s end.

It is almost impossible to believe, but in a year during which human activities are on track to pump another 35 billion tonnes or so of carbon dioxide into the atmosphere, drinks companies are complaining they can’t get enough of the stuff, which is used to make beers and soft drinks fizzy. You really couldn’t make it up.

As Private Fraser in Dad’s Army would no doubt exclaim, with relish. ‘We’re all doomed. Doomed!’