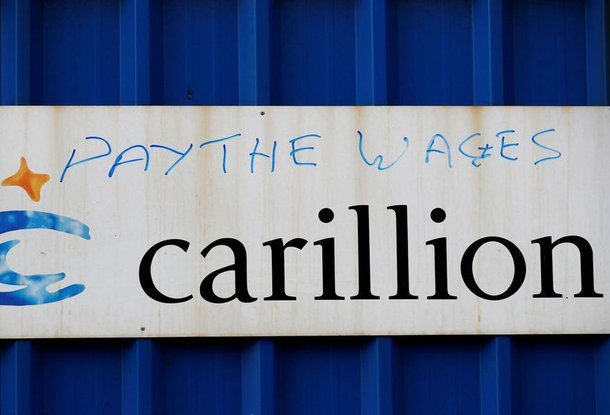 The giant services firm Carillion collapsed under the weight of its own greed, hubris and mismanagement in January this year. Earlier this month the excellent Joint Work and Pensions and Business, Energy and Industrial Strategy  Parliamentary produced one of those gripping reports which the strengthened Parliamentary Committee system sometimes does. Excellent as in, flaying alive the individuals at the head of the company, and demolishing the  pathetic Government attempts at regulation.

The reason this excellent Parliamentary report needs re-visiting is that it paints a fairly terrifying picture of the corporate model now underpinning our economy- and its the one which we have to rely on if we leave the EU. New Weather will be looking at corporate competence a lot over the next few months.

Carillion had 43,000 employees, 19,000 of them in our own country. According to the Committee, its business plan depended on the exploitation of suppliers( 120 day payment  period) treating pension obligations with contempt, and the priority of protecting huge executive bonuses.”It increased its dividend year by year, come what may.”

The fallout, of which we now read nothing in our media, the caravan having moved on, is horrific. £2billion owed to suppliers;a pension liability of £2.6billion, public contracts on roads, hospitals, defence, school meals all broken. The Board, described as ‘self pitying” in the the Parliamentary report, get it in the neck for untruth, for (in one case) leaving the sinking ship, shares safely sold, but the Committee also attacks the ‘rotten corporate culture” of the company.

And this is at the nub of what we at New Weather believe, and why we established ourselves 4 years ago. We know that predatory capitalism, built on merger ( or takeover) after merger,creates companies which it is impossible to oversee or control. Size is a problem not a solution. Forget economies of scale and meet its malign child- diseconomies of scale.

We also know that employee involvement is vital in an efficient company- impossible in either a gig economy or in a mega-behemoth like Carillion . My colleague David Boyle in his previous post made the same point in his discussion of how to re-fashion globalisation and free trade: He and his co author Joe Zammit – Lucia in their book, Backlash – Saving globalisation from itself.  suggested that Governments need to do the following

1. They need to concentrate on helping small and medium sized enterprises rather than only large multinational firms. We suggest how this might be done in the book.

3. They need to encourage innovation rather than oligopoly. Strengthen competition, not reduce it.

Our excellent Parliamentary Committee is not optimistic about the Government taking effective steps to prevent these predictable disasters. It is stuck on tinkering with regulation “characterised by seemingly endless consultation… we do not believe that these changes, even if successfully enacted, would have prevented the corporate failures we have seen, nor tackle some of the systemic weaknesses in our corporate frameworks that enable these periodic disasters to occur.”

The importance of this Report is that it pinpoints the ways in which our corporate system is unfit for purpose. Too large, contemptuous of employees and small suppliers, obsessed with takeovers, overseen by effectively corrupted audit firms, designed to enrich senior management, interested in investment and finance not trade nor innovation, regulated by  weak and powerless regulators, overseen by Ministers ( step forward Chris Grayling) who neither understand the dangers of such companies nor have any will to take them on.

This summary chimes with everything we at New Weather have observed. For the next big failure of a giant corporation neither we nor the Parliamentary Committee will  need to alter a word of what we write. We’ll just make sure to substitute the latest offender’s name.