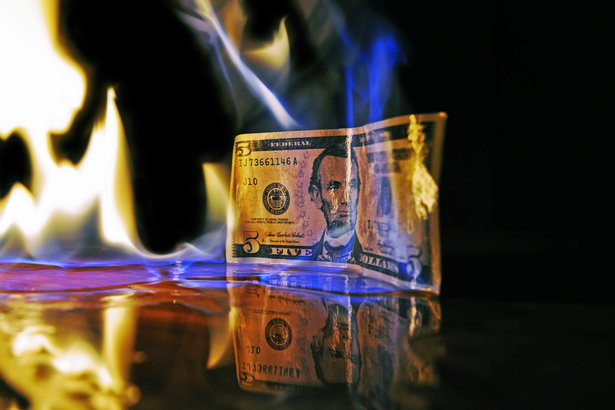 Ripping-up his bank account as he writes, Bill McGuire says that banks are still pouring money into ‘extreme fossil fuels’ in the face of common sense, and what they already know about global warming, wrecking the climate for everyone, themselves included…

It hasn’t been a great month for good news on the climate front. Plenty has been written about the vanishing Arctic sea ice and Greenland’s crumbling ice sheet, but now things aren’t going well down at the bottom of the planet either. The glaciers of West Antarctica, it seems, are retreating even faster than at the end of the last ice age, which coincided with a massive surge in sea levels. At the same time, new research has revealed that the Gulf Stream is at its weakest for more than 1500 years. On top of all that, the biologist Paul Ehrlich is warning of environmental factors driving the near certain collapse of civilisation within decades, and calling for an unprecedented redistribution of wealth to end over-consumption. But hey, let’s pretend none of this is happening.

At least that seems to be the attitude of many of the world’s bankers. If there’s one thing we can rely on banks for, it is putting short term profit before the long term common good. And – once again – we are not to be disappointed. Trump’s accession to the United States’ Presidency has seen the rusting hydrocarbon bandwagon retrieved from its siding, given a new coat of paint, and set off on its travels, and it hasn’t taken long for short-term and short-sighted financial interests to jump on board. The very same banks that are cutting branches right, left and centre to cut down on costs, always seem to have plenty of funds available when it comes to shovelling more money into hydrocarbons. And not just any old hydrocarbons, but so-called ‘extreme’ fossil fuels. In other words, the most difficult to get at and the most energy intensive to extract.

Despite the continued rapid growth of renewable sources, fossil fuels are still predicted to account for three-quarters of the world’s energy mix in 2018, helped along by Trump’s enthusiastic support for all forms of carbon-rich energy production and his intention to withdraw from the Paris climate change accord. This has led to rushes of blood to the heads of those keen to make a fast buck, so that investments in extreme hydrocarbons have surged. During Trump’s first year in power, bank holdings in extreme fossil fuels shot up to more than $115 billion; investments in tar sands oil alone doubling over the first twelve months of his reign. All the usual suspects are involved. J P Morgan Chase has upped its investment in coal a staggering 21 times, at the same time quadrupling its investment in tar sands projects to more than $5.5 billion. As might be expected, given the location of the world’s most lucrative deposits, tar sands investment is dominated by Canadian banks, most notably Toronto Dominion and the Royal Bank of Canada, who together have interests worth close to USD40 billion.

European banks too, are looking to do their bit to hamstring the Paris Climate Accord; this time throwing an extra $2 billion at coal in 2017. More than a dozen European banks increased their coal investments last year, but the lemming-like stampede into this dirtiest of all fossil fuels is being led by HSBC. This is particularly galling at a personal level as, for many years, I advised the bank on the potential impacts on their activities and facilities of climate change and natural hazards. I was impressed, then, that the company should take such an environmentally sound, long-term, view, but realise now that it was just a pragmatic approach to protecting its assets and keeping one step ahead of the game. Today, it appears, the game is big coal, and – any pretence of scruples abandoned – HSBC is once again taking the lead. The bank has long talked up its commitment to tackling climate change and last year flagged its intention to spend $100 billion to combat warming. All well and good, but I’ve always looked to actions rather than words where climate change mitigation is concerned, and HSBC’s actions speak for themselves.

Like all banks, I suspect, HSBC doesn’t really appreciate the impact catastrophic climate change would have on society in general, and the financial sector in particular, to the extent that – well before the century is out – there might not be any banking sector worthy of the name. They may not ‘get’ climate change, but they certainly do ‘get’ money, which is why – having banked with HSBC for a quarter of a century – I am taking mine elsewhere. If your bank is raking it in while the planet slowly roasts, I suggest you do the same.

One thought on “Banking on denial: the investment rush to climate catastrophe”