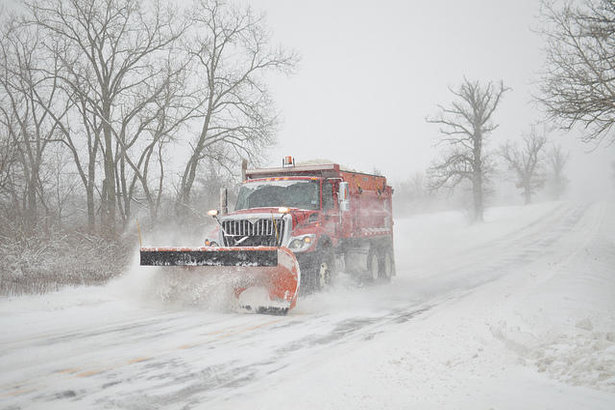 Behind the freezing weather that makes some wish for a warmer world, writes Bill McGuire, there is a climate in upheaval…

As Britain faces its own bleak midwinter, the brutal cold snap that recently gripped much of North America has once again brought the climate change deniers out of the woodwork, and It was hardly a surprise to hear Donald Trump leading the pack, with his throw away remark about the country needing ‘a little bit of that good old global warming.’ Nonetheless, there is a serious element too. For the many who are unfamiliar with how the planet’s climate responds to a warming trend, bitterly cold weather does seem to fly in the face of received wisdom, thereby sowing seeds of doubt about the reality of a world overheating as a consequence of human activities. Faced with images of cars on the streets of Boston incarcerated in the frozen waters of a storm surge flood, it is all too easy to forget that this is – at least at the global level – a localised event. At the same time that snow fell in Florida last week, Sydney was baking in near record breaking temperatures of more than 47°C.

It is always worth recalling the difference between climate and weather; the former is what we expect; the latter is what we get. Put another way, weather is what we see out of the window on any particular day; climate is the average of that weather over time. So, taking into account – across the world – the highs and lows; the heat waves and the freezes, 2017 was actually one of the hottest years on record; the hottest for a year without a warmth-enhancing El Niño gripping the Pacific region.

The simple fact is that as the Earth heats up, it does so unevenly. The land warms up more quickly than the sea; temperatures in the polar regions increase more rapidly than in the tropics. This is one reason why climate change is a far better description of the impacts human activities are having on the planet than global warming. Bearing in mind that most of the associated changes are detrimental to our lives and livelihoods, climate breakdown or upheaval might be an even more appropriate terms. However we refer to it, the point is that ramping up the level of warming greenhouse gases in the atmosphere doesn’t mean that everywhere gets hotter year-on-year. When a stable climate gets a kick in the behind, like the one provided by the massive additional dose of carbon dioxide our activities have launched into the atmosphere, it starts to behave more erratically.

Wild swings become more likely, so that episodes of both extreme heat and severe cold happen more commonly; alongside biblical floods and unprecedented droughts. And this is exactly what we are seeing. The bitter cold that reigned across the eastern United States, for example, was a consequence of the increasingly erratic behaviour of the Jet Stream; the band of powerful, high-altitude winds that separate cold Arctic air to the north from much milder air to the south. Climate change is causing the track of the Jet stream to meander far more than it used to, leading to periodic plunges of polar air much further south than normal. Less newsworthy – but far more worrying – are the incursions of mild air northwards into the polar regions; pumping warmth into the Arctic and accelerating thinning of the sea ice and melting of the Greenland Ice Sheet.

When we see a figure for how much our world is warming it is, then, a number – known as the Global Average Temperature – derived from millions of readings taken across the planet every year. In places, temperatures may have climbed significantly, in others increasing warmth may be slight, while some might have become a little colder. Over the course of the last couple of centuries, and especially since the 1980s, the global average temperature has followed a steadily upward trend from around 14°C, so that our world is now a little more than 1°C warmer than it was before the industrial revolution. How much and how fast the Earth will continue to heat up in the future depends upon how quickly and how deeply we cut greenhouse gas emissions. All the talk is of the importance of keeping the global average temperature rise to below 2°C – the so-called dangerous climate change guardrail – but the slow pace at which emissions are being tackled suggests that by the end of the century, it could be 3°C or 4°C higher, or even more.

None of the numbers sound particularly high, but – once again – these are mean figures. Even a 2°C global average temperature rise translates to double that, or more, in the polar regions, where most of our world’s ice is locked up. A 4°C average rise would see double figure temperature increases across the ice fields of Greenland and Antarctica, bringing the prospect of runaway melting and catastrophic sea-level rise.

The bottom line is that what any one of us sees out of the window, at any one time, whether snow, rain, blazing sun or lowering cloud, tells us precisely nothing about the bigger picture. So next time you find yourself shivering in sub-zero temperatures, don’t feel the need to make a wish for global warming’s arrival. It’s already here.

One thought on “The climate breakdown behind the ice and snow”