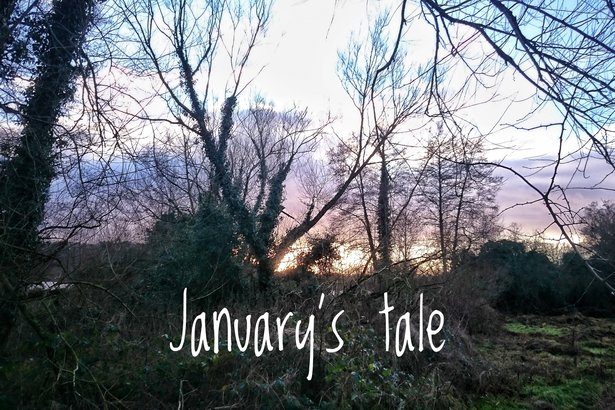 The magician’s house, by Jan Dean, a chilly hearth-side story for the world we live in about a promise, begins a new, monthly feature from our project on modern folk tales for troubling times

The magician’s house was first published in our collection of tales ‘There was a knock at the door…’ available from the Real Press and elsewhere.

Also, Knock twice, a brand new collection, has just been published and is available from the Real Press.

When the magician came he made a promise.

“Work for me for a year and a day and at the end of your service I will give you your heart’s desire. Whatever you ask for, I will give it.”

And suddenly, as if from nowhere, the magician produced a contract. The long scroll of thick yellow parchment crackled as he smoothed it open on the table.

Next a pen and inkpot popped out of the air and into Genet’s hand. She wrote her name at the bottom of the scroll and the magician poured a puddle of hot wax onto it. Red wax. Wax as warm and wet as blood. Then he pressed his ring into its softness and smiled.

“There. Signed and sealed. Now everything is agreed.”

So Genet worked for the magician. “I don’t need much,” the magician said. “Just get up early in the morning and light the fires for me. It’s all I ask.”

“How wonderful,” thought Genet. “All I have to do is light the fires and my work is done. My life is sweet, my life is easy. I am the luckiest of women.”

And so it seemed. For one week and a day all Genet did was light the fires – a big one in the kitchen and a small one in the magician’s workroom. But then a strange thing happened. The magician’s house grew. In the middle of the night, Genet woke and all around her the walls of the house creaked and groaned. The floors grumbled and roared. The roof screeched and howled. Then the great noise subsided and everything fell still again.

“I have been dreaming,” Genet said and she drew the bedcovers up around her shoulders and slowly drifted back to sleep.

It took a long time to gather enough kindling for sixteen fires, and even longer to chop enough logs to burn. For two more weeks, Genet lit sixteen fires every day, and kept them going with fresh logs, and cleaned the ashes from the grates, and swept the hearths and kept them neat and tidy. While she worked Genet kept in mind the magician’s promise. In less than a year she would have her heart’s desire.

“I can do this,” she said. “It is only lighting fires, after all. Not hard work. My life is sweet. My life is easy.”

And so it was, but when two weeks and a day had passed, the magician’s house grew again. The stones of the walls heaved and ground together like great granite teeth. The slates of the roof clattered and scraped. The wooden floorboards, the rafters and joists screamed like banshees. Oh, how the house howled as it grew and it grew. And oh, how Genet cowered in her bed as she heard it. For this time she knew she was not dreaming.

When silence fell she rose from her bed and, by the flickering light of a lantern, she walked through the magician’s house. For hours she walked. Through all sixty four rooms, on all sixteen floors. As she walked she counted the fireplaces. Five hundred and twelve.

When morning came, she went to the magician.

But the magician was not sympathetic. He unrolled the long scroll with the blood red seal and pointed to her signature.

As the weeks passed the magician’s house grew and grew until it was a monstrous mountain of a house. And Genet lived inside it, pale and thin as a stick, moving from room to room, from fireplace to fireplace, covered from head to foot in grey ash.

So Genet tended the fires that burned and burned while the house grew and grew until it reached the coldest limits of the world. There the fierce flames and furnaces of the magician’s house began to melt the ancient ice. But tears and melting ice were all one to the magician, Genet knew that now. She knew too that her world was gone and she could never have it back. The best she could hope for was to forget how lovely it had been. So when a year and a day had passed that is what she asked for.

“Magician,” she said. “Give me the gift of forgetting.”

The magician gave her a black velvet cloth.

“Put all those things you never want to think of here in this black cloth. Then fold it gently round them. Wrap them in the darkness. Bury them in night.”

Quietly Genet took her memories of home and the good green world and folded them in forgetting. She buried all of them in the darkest corner of her mind where they would never bother her again.

“Now I will leave this house,” she said.

But she could not. For now the house was all there was.

Jan Dean is a poet-in-schools whose work appears in over a hundred anthologies. Her latest book is The Penguin in Lost Property – written with Roger Stevens (Macmillan). She is a National Poetry Day Ambassador for Forward Arts. Jan comes from the North West but now lives in Devon.