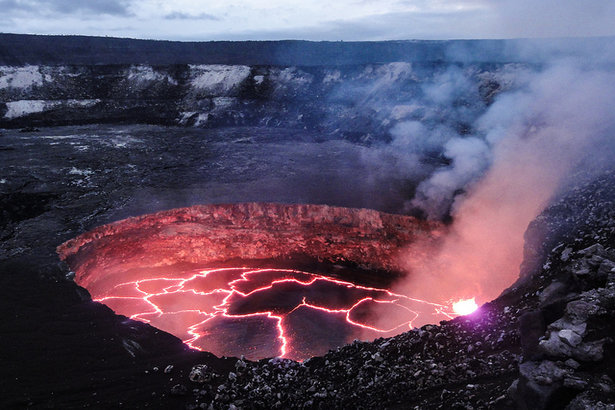 In a world distracted by political tremors Bill McGuire warns we are waking real, angry giants

Too many people think that climate change is all about the atmosphere – if they think about it at all – where the carbon pollution arising from human excesses is accumulating. Others might point out that the oceans have a critical role to play too, most notably in absorbing a substantial chunk of the carbon.

Few, however, would regard climate change as involving the entire planet. But this, in fact, is the reality. It has become de rigeur over recent decades for geologists, environmental scientists and similar others, to consider our world as a single interactive system involving four components: atmosphere; hydrosphere; biosphere; and lithosphere. Or, put another way: air, water, life and rock. To this we could also add the cryosphere; in other words the frozen water locked up as ice sheets, glaciers and snow caps, although – strictly speaking – this is a subset of the hydrosphere.

The reason for trying to understand our planet in this way – a methodology known as Earth System Science – is that effecting changes in one of the system’s components, will also drive changes in the others. In the context of anthropogenic climate change, for example, adding carbon to the atmosphere raises temperatures. This has an impact upon the biosphere through modifying the disposition of vegetation zones and altering crop yields. Hardly surprisingly, higher temperatures also result in a reduction in the volume of the cryosphere, through the melting of ice sheets, glaciers and sea ice.

The hydrosphere responds to higher temperatures via changes in rainfall patterns, leading to flood and drought, and in terms of rising sea levels as ice melts. Ah, I hear you say, all well and good, but what about the solid Earth beneath out feet – the so-called lithosphere. How can that possibly be affected?

In the end, it all comes down to water. Whether in its liquid form or as ice, this is heavy stuff, as anyone who has carried it around or been hit on the head with a water bomb will testify. Imagine then, how much the Greenland Ice Sheet (GIS) must weight – all 2.8 million cubic kilometres of it. In fact, this huge mass of ice is so heavy that it has forced the crust beneath downwards until it is below sea level. Now imagine what might happen if the ice melts.

With nothing to hold it down, the Earth bounces back up; a mechanism known as isostatic rebound. The last time something like this happened on our world was after the peak of the last ice age. Between about 20,000 and 10,000 years ago, the Earth was transformed from a frozen iceball into the, generally, clement world of today. During this period, the Scandinavian Ice Sheet – similar in scale to the GIS today and more than 2km thick – melted completely. As the crushing weight of the ice cover was removed, the crust started to bounce back and earthquake faults that had been unable to move for tens of thousands of years were freed up.

As a result, the strain they had accumulated was released in a sequence of massive earthquakes of magnitude eight or more – the sort of potentially devastating quakes we expect to see around the Pacific Rim, not in northern Europe. One of these quakes went on to trigger a prodigious submarine landslide off the coast of Norway that sent a giant tsunami surging across the North Atlantic; with waves 30m high in Shetland and more than 6m on the east coast of the Scottish mainland.

Hopefully, you are beginning to get the picture? The bottom line is that the solid Earth is just as susceptible to the effects of massively increased carbon in the atmosphere as the other components of the Earth System. Looking ahead, we have good reason to worry about how a shrinking Greenland Ice Sheet might have wider, unlooked for, consequences that might threaten the entire North Atlantic Region. There are other worries too. At the end of the last ice age, the melting of the kilometre-thick ice cover across Iceland, spawned a ‘volcano storm’ that saw volcanic activity increase 30 – 50 times. Today, there are still plenty of volcanoes beneath the Vatnajökull Ice Cap, which still covers the eastern part of the island, and is melting fast. Researchers have already predicted a volcanic response as the ice load on the volcanoes beneath reduces, and we know from the 2010 eruption of Eyjafjallajökull just how much chaos an Icelandic volcano can inflict.

The most recent research has revealed that hidden beneath the ice of West Antarctica are close to a hundred volcanoes. Currently, these volcanoes are lying dormant. As global warming continues to drive the melting of the ice, however, the reduced load could promote eruptions. These in turn could act to destabilise the ice above, leading to accelerated collapse of the West Antarctic ice sheets and a multi-metre rise in sea level. As if we haven’t got enough to worry about!

Bill McGuire is Professor Emeritus of Geophysical & Climate Hazards at UCL and writes regularly for the New Weather Institute about our environmental predicament.

2 thoughts on “Why climate change means more earthquakes and volcanoes”