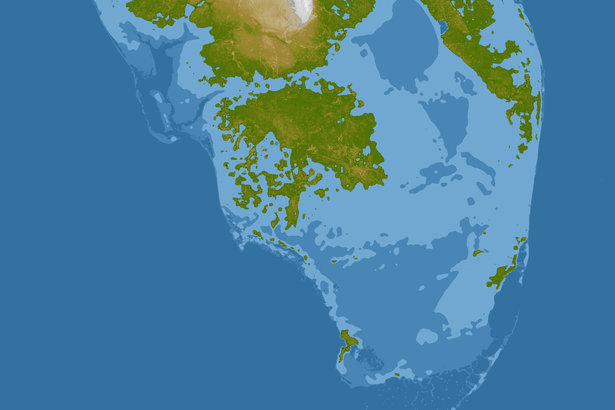 Prof Bill McGuire wonders whether Miami’s financial district will soon give a whole new, literal meaning to going ‘off shore’, ending up 60 km out to sea

Rarely, if ever now, does a month go by without more evidence coming to light of the increasingly dire straits we find ourselves in as global temperatures continue to ramp up. Last month it was deadly wildfires and heatwaves. This month it is the turn of catastrophic monsoon conditions in South Asia and, of course, the mayhem wreaked throughout the Gulf of Mexico and the Caribbean, first by Hurricane Harvey and then – following close behind – the monstrous Hurricane Irma.

When talking about such devastating events in relation to our overheating planet, there always has to be a caveat. That is, it is not possible – with complete certainty – to say that any particular incidence of extreme weather wouldn’t have happened anyway. But, to be honest, this does not really matter. All anyone needs to do is to look at the trend; the way extreme weather records are being shattered right, left and centre, to know that something big and very bad is happening here.

Atlantic hurricane activity has always been at the heart of the debate about how anthropogenic climate change is likely to influence extreme weather. Because hurricane numbers seem to show long term trends linked to natural climate cycles, it is difficult to unravel any climate change signal. Consequently, whenever there is a period of increased activity, arguments about whether this is a natural variation or climate change, are reinvigorated. Looking ahead, it is also proving difficult to forecast how patterns of hurricane activity will look in an even hotter world.

Nonetheless, a consensus has developed over time, which predicts that while storm numbers might stay roughly the same, or even fall, their power is likely to increase. This is a reasonable assumption to make, given that the tropical sea surface temperatures, which provide the driving force for hurricanes, are only going to go higher. Hurricanes will also keep getting wetter, as a warmer atmosphere is able to hold more moisture, dumping more rain over a shorter period.

What then should we make of Harvey and Irma? Would they have happened in a cooler world unpolluted by anthropogenic carbon? The figures suggest not. Harvey dumped more rain on the US than any other tropical weather system; a staggering nine trillion gallons. That’s close to nineteen times the daily discharge of the Mississippi River. Even more extraordinarily, over the course of its 14 day lifetime, Irma expended as much energy as all the storms in a run-of-the-mill Atlantic hurricane season. Is this the new normal – quite probably. Future hurricane seasons are likely to see relatively quiet episodes, punctuated periodically by colossal storms capable of enormous damage and loss of life. The cost implications are likely to be quite staggering and it is worth noting that early estimates suggest that Harvey and Irma together may have been responsible for damage to homes and infrastructure costing upwards of half a trillion US dollars. That’s more than 2.5 percent of US annual GDP.

Looking ahead, then, it is difficult to see how coastal cities in Florida and elsewhere around the Gulf Coast can survive in the longer term. Not only will they struggle increasingly to rebuild after successive batterings by super-hurricanes, but they will also have to contend with the steady inundation of the sea. Footage of the streets of Miami’s financial district swamped by Irma’s storm surge provide a vision of the city’s future. Estimates vary, but it is likely that – whatever we do in terms of emissions reductions – we have already committed our world to a sea-level rise of at least 5m, and possibly as much as 20m. It should be a sobering thought to those who live and do business in Miami, that a rise of 5m rise will put the city at least 60km offshore.

The image shows the effect of sea level rises of 5m and 10m (in lighter blue) on Southern Florida on the outline of its current land surface area. Source:  earthobservatory.nasa.gov

One thought on “The new Atlantis: will Miami become the City in the Sea?”