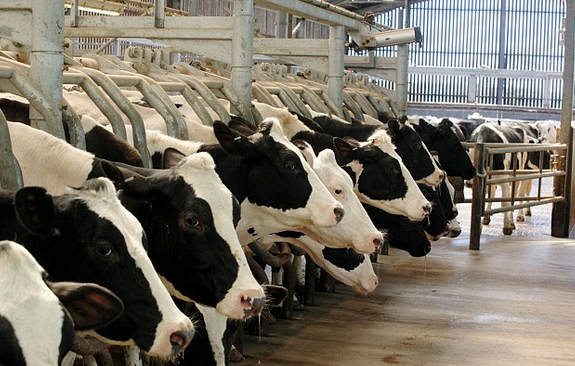 Today The Guardian reveals the onward march of the mega farms defined as warehouses – effectively accommodating more than 40,000 poultry birds, 2,000 pigs and 750 breeding sows. We now have almost 800 of these mega farms in the UK. In the same week Ahimsa, a foundation which believes in letting cows live natural lives, nursing their calves, and grazing out of doors was publicised to gasps of horror as the price for their milk was revealed to be £2.50 a litre. Tesco meantime charges 95p a litre for semi skimmed milk.

Some years ago I became a vegetarian. I was brought up on a mixed arable and dairy farm in the North of Scotland. The dairy herd grazed outside and were brought in twice a day for milking. The pigs were housed outside in families. It wasn’t paradise – cows were separated from their calves after a couple of days, a matter of anguish for the animals but a source of milk for the business. But the bar for animal welfare is set low and the fact that the abattoir was small, and only three miles away, and that our pigs and cows saw the light of day in their lives, now seems a bit of a miracle.

I wasn’t a vegetarian in those days. I became one because of the increasing industrialisation of animals. And for the last ten years I have been a quiet and apologetic vegetarian. I’ve agreed with people who say that I’m a hypocrite cheese eater, leather shoe wearer, indiscriminate make-up buyer (never sure which brands test on animals). And I never try to convert. Please eat all the meat you want, I say, it’s none of my business.

Well its now time to step up to the plate. Which increasingly contains meat and dairy products produced under God knows what kind of conditions. In fact we do know – your milk will come from cows kept in warehouses, kept lactating for their average 3-5 years of life after which they are knackered, done for, and slaughtered. Your eggs come from hens that most likely have no perching or scratching areas, no natural light and no space to wander. Your bacon from pigs that know exactly their fate when they enter the hellish slaughterhouse and are taken howling to the automatic moving lines of knives which slit their throats.

The rise of the US style mega farms in the UK is put down to the deadly marginalisation of profits in farming. Its got a long history- the UK has come to expect cheap food and plenty choice, and politicians have deliberately kept that policy centre stage. Farmers have been screwed over by supermarket chains.

All true. But if we leave the EU – with its effective animal welfare policies and its ongoing search to balance farmers viability with minimal cruelty in the food chain, then we are going to see a push towards much less regulation on UK animal welfare. It’s not great at the moment but we can’t weaken it.

We can campaign on keep the same levels of protection. We must. But more important is to honour the animal in our minds, and recognise that they are us – with the same apprehensions of pleasure, pain, terror and agony. We need to allow them a life before death. We need to revive that musty old phase, God’s creatures. We need a revolution in our thinking about our fellow beings, four footed and feathered and grunting and mooing.

So no, its not alright if you eat meat without knowing if it came from a warehouse or a field; and drink milk without knowing if the mother ever got to lick her calf; or casually order a chicken sandwich without caring if your food lived its life on a postage stamp in artificial light being pecked to death. That’s not alright. And I may well tell you so at the next meal we share.

New Weather @NewWeatherInst
RT @AndrewSimms_uk: Thank you to all the #NHS nurses & midwives of this, and every generation before #nursesday2021 #InternationalNursesDay…
(about 2 hours ago)

New Weather @NewWeatherInst
RT @AndrewSimms_uk: 'The master's tools will never dismantle the master's house,' Audre Lord's famous observation applies as much to the sh…
(about 4 hours ago)
Follow @NewWeatherInst