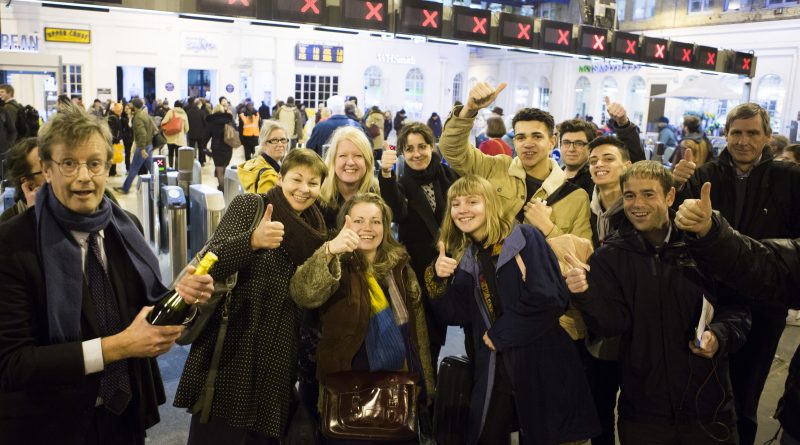 New readers start here. Listening to the BBC, you might easily believe that the crisis involving rail services across Sussex and Surrey was just about industrial action. For the poor benighted passengers, that really isn’t the case – the serious chaos has now been going on since May. Milder chaos since before.

I am writing about it here because, first, I live in Sussex. Second, I’ve become fascinated with the whole saga because of what it says about the state of public services across the sectors. Third, because of a related project about megatrends which New Weather is involved with, of which more another day.

Let’s explain the dispute first. These are not major issues, though personally I don’t want to travel by railways shorn of human beings. It isn’t healthy or friendly or, well, human.

For Aslef, the key issue revolves around the legal liability of drivers when they operate the doors (there is some circularity in the government’s position here: driver-only operation is safe therefore accidents must be the driver’s fault).

For RMT, the key issue is who decides if a train can go out without an ‘on board supervisor’. These are not insurmountable issues, though the union action has managed to let the government off the hook of the real issue – which is whether there are any circumstances, any amount of incompetence, that would line them up on the side of service users and not franchise holders.

So who is to blame for eight months of unravelling services, given that the Aslef overtime ban only began in early December? First let’s talk about the franchisee, Govia Thameslink Railway (covers Southern, Gatwick Express and Thameslink).

First, the company’s failure to recruit enough drivers and guards. They remain about 20 per cent below what they need. That means they tend to use reserve staff to cover overtime, which means nobody is available when anything goes wrong. And it always seems to.

They made things worse in May by preventing depot managers from negotiating with staff to do half shifts, coming in a bit earlier or staying a bit later to cover gaps. This called ‘modernisation’, as the jargon goes. The trouble is that, though central control seemed efficient to them, it was the depot managers who had kept the show on the road before.

Their relationship with guards reached a new low when they spread the completely illusory idea that high staff sickness rates in the summer was because of some kind of secret industrial action. In fact, their frontline staff was facing a perfect storm of chaos, dealing every day with crowded platforms, dangerous trains, no information, furious passengers, and doing so – generally speaking – with courage and good humour. It was hardly surprising that the stress overcame some of them.

Then, once again, the Govia Thameslink self-destruct button was pressed. They insisted that any sickness, even for a day, required a doctor’s note, apparently unaware that doctors only gave out notes for a week. Of course the sickness lasted longer as a result.

But spare a moment for Charles Horton, Govia Thameslink’s chief executive, who has very little room for manoeuvre. Because this is not, as most people think, a privatised service. It is just contracted out for a fee (£8.9bn over seven years). Meanwhile the taxpayer gets the ticket money, and pays out for delay refunds (Govia gets 3 per cent).

This is because (a) the undoubted disruption caused by the redevelopment of London Bridge, and (b) because the Department of Transport wants Govia to be the battering ram that forces Driver-Only on express trains for the rest of the country (it is already in use on commuter trains), and they were expecting industrial disruption. Even, apparently, hoping for it.

It must be extremely stressful. Especially because, if he is to meet extra earnings targets, he gets no benefits from extra ticket sales – all he can do is to get rid of platform staff and ticket offices. And eventually perhaps, onboard customer staff too (but they deny this bit).

It is a disastrous contract, and it flies in the face of the principles of privatisation. The result is the most inflexible combination of state and private control, which is – as you might expect from a monopoly – entirely immune to customer influence. In practice, they and the unions are so obsessed with each other, that both sides have forgotten the users.

What can the passengers do? Well, there aren’t so many options since they get vilified for failing to take sides in the old 1970s style. They might start by informing themselves by buying the excellent Cancelled! book (by me, I am biassed). Perhaps they need innovative new methods of campaigning against monopoly power, like the #passengerstrike initiative.

But there is one other peculiarity. If you bought your Southern season ticket on an American Express card, I understand they have been paying out 50 per cent of the cost under their guarantee that the paid-for service wasn’t actually provided. It is worth a try with the others too…

2 thoughts on “A short guide to the Southern Rail fiasco”

New Weather @NewWeatherInst
RT @AndrewSimms_uk: On this 👇 a few thoughts from earlier in the year & the case for ecological interest rates... https://t.co/TH1ceBGsjq h…
(about 17 hours ago)

New Weather @NewWeatherInst
RT @AndrewSimms_uk: While the latest variant reveals the myopic failure of rich countries to share vaccines, tech & patents, it is part of…
(about 2 days ago)
Follow @NewWeatherInst