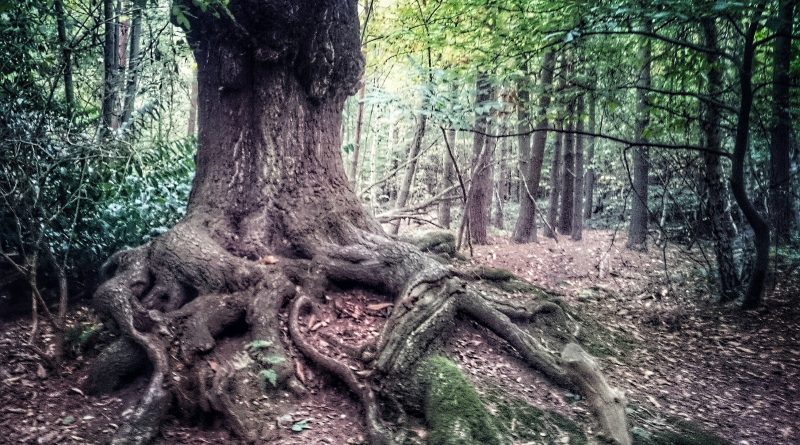 This story is an extract from our new collection of 23 modern folk tales for troubling times There was a knock at the door… which is available now in print and as an e-book: Endless war laid waste to the once great Kingdom. Maya took control when her parents died, inevitable civilian casualties of an airstrike that they were told was against insurgents. Their house was destroyed and the neighbourhood levelled, so she gathered her younger brothers and sisters and decided to leave for Europe.

Fixers who she knew by reputation could arrange the journey, and she hoped to pay with the few family valuables rescued from the rubble of their home. One, nicknamed the ‘Ogre’, was feared but thought effective. She led her siblings through the shattered city to the almost-abandoned suburbs where she thought the Ogre lived.

In the middle of flattened, burned-out and bullet-scarred buildings was one that seemed almost new – untouched or rebuilt she couldn’t tell.

Maya expected the Ogre to be tattooed, sweaty and hung with heavy jewelry. And, he was huge, but not like that at all.  In the doorway, flanked by men with guns, stood a sharp, clean suit and a permanent, slight sneer. He would help but she, her brothers and sisters would have to stay overnight. A frown crossed Maya’s face but he said they would be safe, and could share a large, dormitory-like room with his own children.

A big, powerful-looking four-wheel-drive car, almost the size of a truck and covered in mud and dust was parked among several other, spotless and expensive executive limousines. The Ogre called this his Seven League Boots. Specially adapted with a suped-up engine it could outrun the police and check-point guards, and using its spacious boot he smuggled people across the border. They would leave the next day before dawn, he said.

The Ogre took all Maya’s valuables, even the precious pendant given by her mother on her 18th birthday that she tried to keep. He told her to make sure that she, and each brother and sister, took a blue blanket to sleep under from a pile that looked stolen from a UN aid convoy.

They were sent to where the Ogre’s children slept while the Ogre went to another room with his cronies. But Maya, suspicious, followed and listened at the door. “When they are all asleep,” the Ogre said to his cronies, “go to the room and use your clubs on all the children under blue blankets. They have no hope outside this country, we will be doing them a favour. And, anyway, I am too busy to take them across the border.”

Maya saw that the Ogre’s children all had finely woven blankets of soft, colourful yarn and suddenly she thought how they might escape. Slipping a pebble beneath herself so that it would be too uncomfortable to slumber she waited for the Ogre’s children and all her brothers and sisters to fall asleep. Then, swiftly, she switched the coloured and blue blankets, taking care to cover everyone’s faces to hide their identities.

Later, when the cronies crept into the dimly lit room, unknowingly, with sickening thuds they bludgeoned to death the Ogre’s children. As soon as they left, she quietly woke her siblings, took the keys for the Seven League Boots (she guessed they were the ones with the big boot on the keyring and a number ‘7’ scratched into it, and sped from the suburb towards the border at almost unbelievable speed, easily outpacing the cronies who raced after her once they realised their mistake.

At the checkpoint she explained what had happened and was taken to a large building that had air conditioning, smelled clean and was full of smart men and women working on computers. In the biggest office she was sat in front of man behind a large desk who seemed to be in charge. ‘Reginald. X. King’ said the nameplate in front of him. Maya asked for asylum as she knew you were supposed to. King explained that the man who had tried to trick and kill her was known to him and had things they wanted. “I can arrange for your sisters to have safe passage to the European country of your choice,” said King, “if you will do something for me.”

Maya agreed, of course, she had no choice. “The Ogre has a list of routes and ports he uses to smuggle people, guns and drugs,” said King, “we need that list.” Maya took the 7 League Boots and returned to the Ogre’s stronghold with incredible speed, arriving before dawn to hear him screaming at his cronies for their failure. While he was distracted she crept into a room with filing cabinets, found a draw full of maps and directions, grabbed them and sped back to the border before she was seen.

“If I knew you’d find it that easy I would have asked you to do more,” said King, smiling, before adding after the briefest pause, “If you return and find me the list of all his accomplices I will arrange for your brothers to have safe passage to the European country of your choice.” Maya felt tricked again, but still had no choice so leapt once more into the 7 League Boots and went back to the Ogre’s. This time, at the door, she could hear him weeping loudly and uncontrollably at the back of the house. But she could afford no sympathy. The terrified cronies had made themselves scarce. Maya found more files with lists of names and contact numbers and fled.

“What a resourceful young woman you are,” said King, “I have one last task for you. If you do this I will arrange safe passage for yourself to the European country of your choice. But there is one condition, you must tell no one what I ask you to do.”

What King wanted was details of the Ogre’s bank accounts, their location, numbers and passwords.  Knowing something was wrong, but with no option, Maya agreed. But she asked for all the documents for her, and her brothers and sisters to be prepared so that she could take them on her return.

Back at the Ogre’s everything seemed deserted so, confident, Maya went straight to where he kept his information. This time, though, with a roar the Ogre leapt from behind the door and grabbed her.

In a rage he was about to squeeze the life from Maya when, thinking quickly, she said, “Ogre, do not kill me, I can take you to the man called King who plots your downfall.” The Ogre paused so Maya hurried on, “He made me steal your information for the foreign powers to save my brothers and sisters, and now he wants all your money and I think he wants it for himself. He is well protected but if you let me live, I can bring him out to you because he does not suspect me.” The sneer returned to the Ogre’s face. Maya said he must hide in the boot of the Seven League Boots to avoid any guards, and she drove so fast back to Reginald Xavier King that the wheels seemed not even to touch the ground nor people see them pass.

At the compound she told King that for safety the Ogre’s bank details were locked in the Seven League Boots in a hidden parking spot beyond the perimeter fence. She gave him a look that said she understood his game, and waited for the promised official documents giving safe passage to Europe for all her brothers and sisters.

On the great desk lay a newspaper with a headline in large letters that read ‘EU Ref: UK Votes Out’, with a picture of tired looking people huddled in some sort of camp.

After a moment King smiled, handed over a package containing official letters and new passports and followed Maya to the Seven League Boots.

The information was in a file under the back seat, she said. When King climbed in she locked the door from the driver’s seat, which was separated by a metal grill. Then as loud banging started from the boot and a startled look crossed King’s face, Maya fired the powerful engine, pointed the Seven League Boots at the heavily guarded compound entry, jammed a rock on the accelerator, and released the handbrake as she leapt clear. All the soldiers saw was the blur of something big and very fast approaching, and they knew exactly what to do…

In the light of the ensuing fire and explosion, Maya looked at her package. On the boarding passes for the following day, for her and all her brothers and sisters, were the letters LHR, London Heathrow.

One thought on “The Ogre – a modern folk tale”