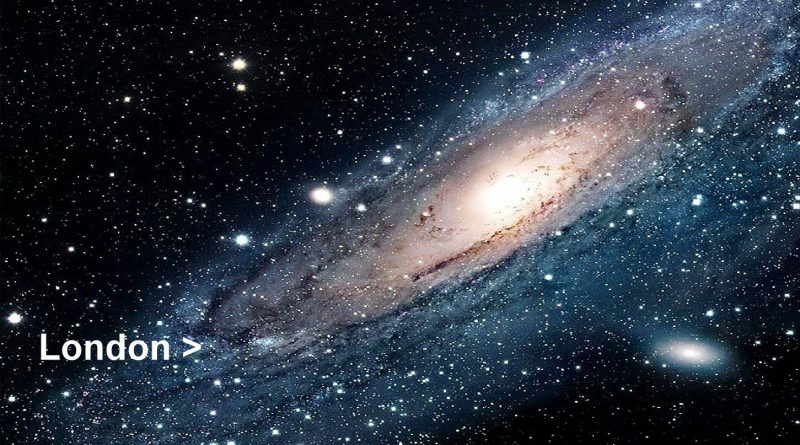 We are the life we seek ‘out there’. Nobody suggests we could live there, but new excitement about potential life on Jupiter’s watery moon Europa, is a reminder of the damage we’re doing to the life beneath our feet and what we might do to take better care of it. This is the text of the recent speech given at a special event at London’s Royal Festival Hall, by the New Weather Institute’s Andrew Simms, in support of making London the first National Park City.

“Late last year the discovery of the nearest Earth like planet was announced, circling a star system called Wolf 1061. One of its planets, Wolf 1061b, was described as ‘quite likely a larger and hotter version of Venus.’ Remember Venus suffered a version of runaway global warming. Wolf 1061c, however, could be like a mini Neptune, or it might just be rocky and habitable. Cue acres of media coverage and wild, romantic speculation that not only might there be life ‘out there’, but also that there might be somewhere else for us to go in the Galaxy if we make too much of a mess of our own, oddly habitable home planet.  Public figures ranging from Richard Branson to Stephen Hawking have been heard urging us to look out and beyond for our future salvation.

There is a problem though, at 14 light years away, which may not sound much, using Deep Space 1 technology it would take you around 267,452 years to get to Wolf 1061c, or just under 9000 human generations. And, just imagine your disappointment if, when you got there, it turned out to be a hostile environment, like Magaluf on Friday night. There’s no guarantees in deep space exploration.

But wait, just a few weeks ago, another Earth like planet was found, Proxima Centauri B, and this one is much closer at only 4 light years away, or just about 76,000 years to get to. It also has no days to speak of in the conventional sense, locked in a kind of geostationary orbit, scorched by its sun on one side, and in deep frozen darkness on the other, also subject to deadly solar flares.

Perhaps it’s time we made the best of where we are. How might we do that? With ice melting that shouldn’t, greenhouse gas emissions pushing us towards the catastrophic end of climate scenarios, and a global agreement falling far short of what is necessary – we need to reimagine our relationship to the world around us.

Cities are both hugely resource intensive and vulnerable to climatic upheaval. They are also the places where most big decisions get made and where we can experiment with ways to live better together and with the biosphere we depend on.

A while ago I proposed the idea of National Gardening Leave. It combined the shift to a shorter working week with widespread urban greening for both aesthetic and productive purposes. The pamphlet proposing it explains the wide-ranging potential benefits for health, well-being, employment, education, community, the economy and environment. If you wonder where all this greening would happen in a built up City like London, a study of New York, the most densely populated city in the US, found upwards of 6,000 acres that could be turned to urban gardening. Cities do have space.

We know that a growing number of studies reveal that for children contact with nature improves self-esteem, concentration and creativity, it helps develop the ability to manage risk, contributes to health and helps improve depressive and hyperactivity symptoms. It’s amazing stuff, nature. Why pave it over…

In a single, deft act of imagination, making London a National Park City would change our expectations of, and relationship to, this great urban expanse.

If London was a national park we would assume it was for all of us, reversing the creeping acceptance of the divisive privatisation of public space. We wouldn’t let big business and finance rope of parts of it for private wealthy access only. We’d leave vehicles outside, take public transport or the long walk in, minimising traffic, cutting pollution and breathing cleaner air. We’d encourage, protect and restore nature, and stop and look in wonder (actually I do that sometimes anyway). We’d smile more and be pleased to greet each other, feel better, more at ease in our city. Obviously, you’d have to carry waterproofs, picnics and rugs, and eat more cream teas– but nothing is ever that easy…

Most importantly, it would deftly root the home of both government and finance to an awareness of ‘environmental fundamentals’. It’s exactly the overnight re-imagining needed in the face of climate change to flip how we relate to the environment.

I am fascinated by the concept of realism in politics and economics – it is used to challenge and suppress attempts at system change – but nothing is ‘realistic’ in the true sense of the word if it is not steering us in the direction and time frame to avoid irreversible climatic upheaval. There is nothing ‘realistic’ in wasting away your life support system for the sake of inertia, or ideological economic dogma, or partial, short term material accumulation.

We desperately search for life ‘out there.’ If they found on Mars a single blade of grass there would be ecstasy at ground control, media jubilation and trillions thrown into research and exploration. Yet at the same time we push a mass extinction event on the glorious abundance of life on our home planet – all in the name of economics. Just as looking differently at our city could help us live better here, we need to realise that we are the life we’re waiting to discover ‘out there’ – and we should celebrate, cherish and protect it, right here, where we are, in London, let’s make our city a National Park.”