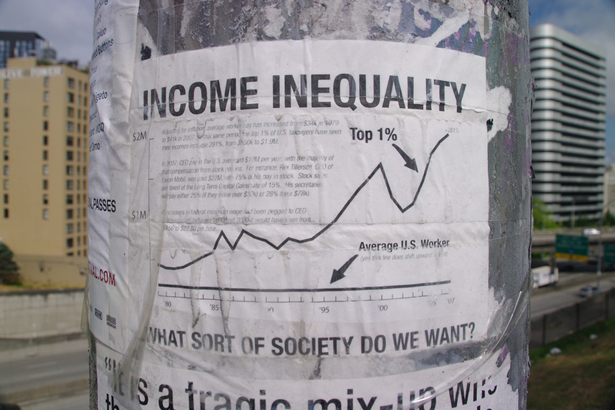 Professor Saskia Sassen, the great sociologist and geographer, explains why growth has become toxic – and what we should do about it.

We have reached an extreme point in the evolution of negative conditions. The language of more – more inequality, more poverty, more environmental destruction – is now insufficient. Our standard measure for economic growth, GDP per capita, leaves out growing numbers of people, places, and activities. It measures a shrunken economic space. And in so doing can come up with some positive growth numbers, even as significant numbers of people, small businesses, and places have been expelled from “the” economy. This mode of measuring the economy amounts to a kind of economic “cleansing” – a term I intend to harken back to that other brutal mode referred to as “ethnic cleansing.”

What confuses matters further is that along with escalating inequality and ruined small businesses, much is getting better for many people, sectors and places. Over the last few decades a 20% of the middle class in countries across the world has become richer than they ever thought they would be; in fact, they no longer fit the meaning of middle class at all. But much of the rest of the middle class has become poorer.

This bimodal pattern is also at the heart of the post-2008 crisis ‘recoveries’ in many countries: yes, millions of new jobs have been created but not as many as were lost. Further, too many are at the top and at the bottom, and far to few in the broad middle. The US is a good example: it has generated millions of new jobs. But 65% of the jobs lost in the crisis were middle middle-class jobs, but only 25% of the newly created jobs are such –most new jobs tend to be at the top and at the bottom of job hierarchy.

Secondly, the numbers speaking of recovery and growth rest increasingly on a kind of economic ”cleansing” that expels a mix of negative conditions and trends from our measures. Here some examples from very diverse settings. Destruction of modest housing in London to build luxury apartments is registered as growth. At the other end of the world, when land grabs by powerful foreign governments and firms expel local smallholders this is also registered as growth and ‘development.’ Smallholders know how to protect the land via crop rotation and organic fertilisers and pest controls, while plantation agriculture kills the land in a fairly short period of time, which means they soon need to find more land for their plantations, in a rapidly escalating destruction of land for agriculture.

One key difficulty we face in contesting some of the current modes of interpreting and measuring “growth” in our economies is that they worked in the post-World War II decades. Growth (e.g. GDP per capita) in that period meant above all growth in the middle sectors, which meant benefits for growing numbers of modest income workers. Today, growth tends to happen at both ends of that spectrum. And this is a double negative: a growth in very low-wage jobs and in very high-income jobs. Beyond the issue of what we are actually measuring, lies the fact that many of our systems – notably, healthcare – are not set up for growth at the extreme and impoverishment of the middle. They depend on a large modest but prosperous middle. Such a middle functions as a distributed condition: a bit of middle class in every place.

There is work to be done on how we measure economic growth and how governments set up support systems. And this is a battle that should be fought by experts and by people generally.

There is work underway that begins to contest both our standard measures and this expanding intermediation of our economies.

Here is one local version of this fighting back. It needs to be expanded and recognized as significant. It is the work of re-localising components of “the” economy. Re-localising in this case becomes a fight against the corporatising of everything: do we really have to depend on corporations to have a cup of coffee, to buy vegetables, to get bookshelves? Any neighbourhood is likely to have local talent that could handle this. We must re-localise whatever we can re-localise. This will inevitably be a partial project as many of our more complex needs can only be met via complex knowledge systems (e.g. a hospital). But we must maximise the replacement of franchises by work done in our or other neighbourhoods in our cities and towns. A franchise by definition takes out part of the consumption capacity of a neighbourhood out of that neighbourhood and onto central headquarters. We must maximise the recirculation of our spending in our localities, and that means a collective effort to meet as much of our needs locally. I see in this type of effort a first step that can lead to other efforts, notably a new kind of politics.

There is work to be done – in our analyses and on the ground.